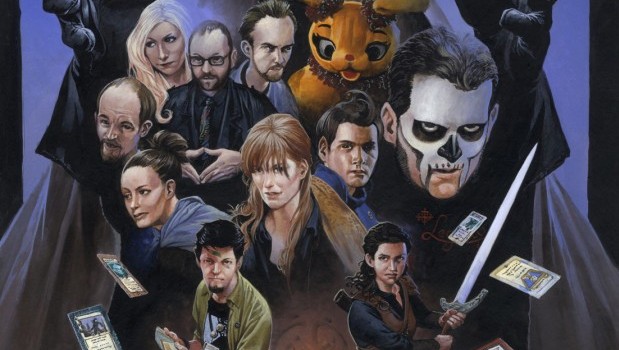 If you have seen The Gamers: Dorkness Rising, then you know about the gang behind the Hands of Fate.  While this group has saved the world with their swordsmanship and spells…while roleplaying.  Now they have a new challenge, the realm of the CCG.  Using the once-fictional now real game Romance of the Nine Empires, based on the Legend of the Five Rings.   If you’re attending Pax Prime, then you can go to a special screening with a Q&A afterwards.

Hot on the heels of a wildly successful appearance at hobbygaming mecca Gen Con Indy, many Zombie Orpheus Entertainment cast and creators of are coming to Pax Prime in Seattle. Video game fans everywhere will be able to view the new release The Gamers: Hands of Fate and enjoy a Q&A with many of the actors from the series.  The screening will occur Sunday September 1st in the Serpent Theater at 4pm.  Pax Prime is Disneyland for video gamers and the show gathers 70 thousand plus attendees yearly.  Can’t attend the show? There are a few days left for fans to enjoy the film for free at  www.watchthegamers.com . Free access to the movie ends August 31st.  DRM-free digital downloads are also be available for sale.

A serialized extended edition of the movie begins September 3rd on YouTube.com with thirty plus minutes of additional scenes, detours into a Matt Forbeck’s Dangerous Games novel and Alderac Entertainment Group’s Romance of the Nine Empires card game. Viewers will experience the film via an annotated multi-linear experience. DVD and Blu-Ray editions containing both the festival and extended cut of the movie will be available this fall.

If you can’t attend Pax Prime, there are two days left to go to The Hands of Fate site and watch the movie free of charge.