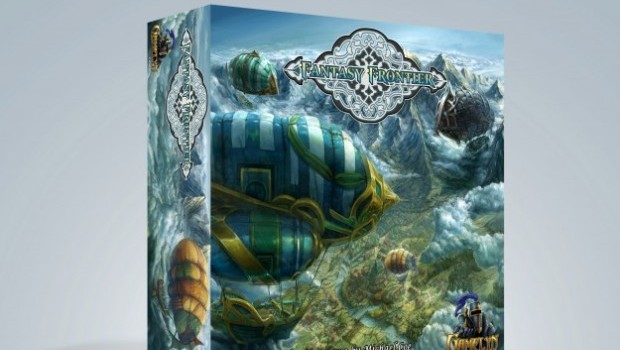 While the indies are getting a lot of press in the video game industry, the advent of Kickstarter has created a surge of independent developers and publishers.  Michael Coe is one of those people who has taken a chance and had a huge hit on Kickstarter with Dungeon Heroes.  Now his publishing company Gamelyn Games has put his latest game, Fantasy Frontier, up on Kickstarter.

In Fantasy Frontier, 2 to 4 players take control of a crew of airship pioneers! Players manage the actions of these pioneers each turn in an effort to scout the land, gather resources, construct townships, and even battle it out in aerial combat. Creating geographic patterns via tile placement, the players will develop a new world each time they play. Players compete to be the first to score the required number of victory points to win the game.

This sounds a lot like piloting the air ships in some of the Final Fantasy games.  Being able to set up the game differently each time will definitely help the replayability of it.  After being up for less than a day, the game already has over $5K of the $25K goal.  While some of the Kickstarter projects have turned out to have issues, I have no doubts that Michael will be able to deliver.