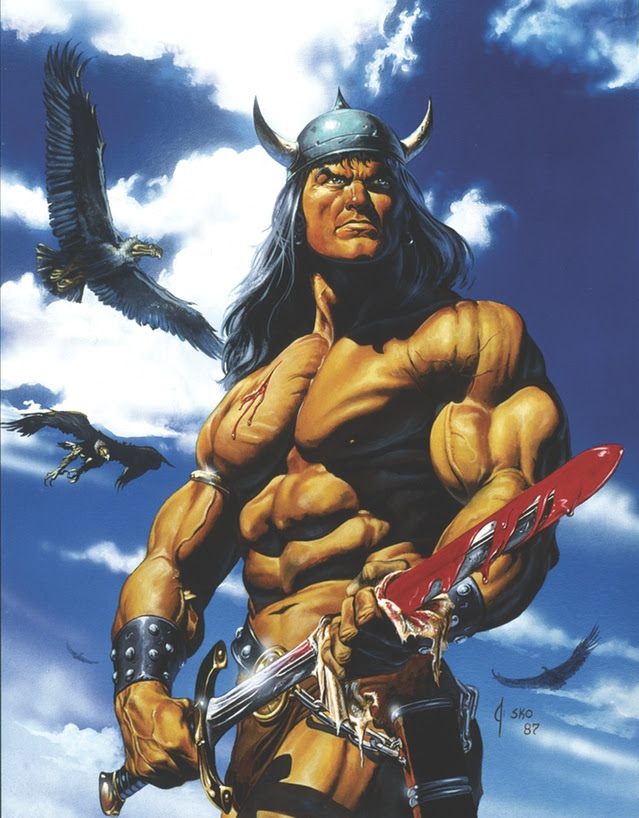 Modiphius Entertainment is currently holding a Kickstarter for the newest reimagining of Conan in Conan: Adventures in an Age Undreamed of. Conan has had a vast and varied history with tabletop, and one of its greatest assets is the iconic art it boasts with its products. Joe Jusko has recently joined the team to supplement this classic feel.

Modiphius, publisher of award-winning roleplaying games like Achtung! Cthulhu and acclaimed board games like Thunderbirds the 50th Anniversary Board Game is pleased to announce the addition of Joe Jusko, the acclaimed fantasy artist, to the  Conan: Adventures in an Age Undreamed Of artistic team. Jusko is an award-winning artist known for his many covers for Savage Sword of Conan and he has also done numerous paintings for Dynamite’s John Carter titles Warlord of Mars and Dejah Thoris, as well as working on  Heavy Metal, Vampirella, and the Marvel Masterpieces trading cards.

During his career, Jusko has worked for almost every major comic book publisher, producing hundreds of images for both covers and interiors and is especially noted for his work on Marvel’s The Hulk and Punisher. Jusko will be working alongside renowned Conan scholar Jeffrey Shanks to bring to life another authentic scene from Conan’s savage world of Hyperboria.

Jusko is the latest signing in what is proving to be a formidable art team which includes such legends of  illustration like cover artist Brom, Sanjulian, Simon Bisley (Slaine, Lobo, Batman and Heavy Metal)  Val Mayerik (Conan the Barbarian, Savage Sword of Conan ), Liam Sharp (Judge Dredd, Red Sonja and Mam Tor: Event Horizon) and Daren Bader (MagicThe Gathering, World of Warcraft, Red Dead Redemption) plus a host of other celebrated Conan artists.

Joining these titans of illustration is a renowned writing team headed by Jason Durall, and guided by award-winning Robert E. Howard scholar and essayist Jeff Shanks, (Conan Meets the Academy) and featuring Patrice Louinet and Mark Finn, which completes one of the most formidable line-ups in RPG gaming – an august company worthy of the great Cimmerian himself.

Be sure to check out the official page for continued updates on this project.