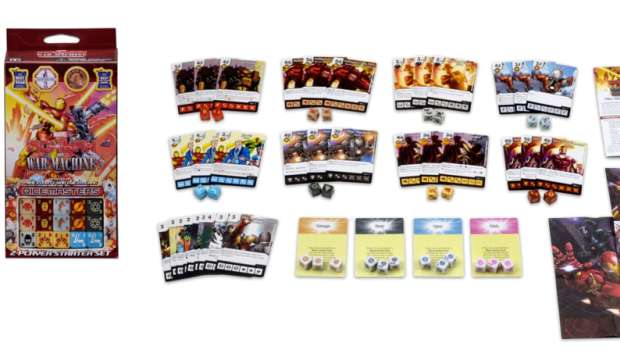 At one time Iron Man was considered a B-level character.  However, once Robert Downey Jr. became Iron Man in the Marvel Cinematic Universe, the popularity of the character has grown.  It’s not surprising that WizKids would create a Dice Masters set based on the character with War Machine coming along for the ride.  That set is available today.

The Marvel Dice Masters: Iron Man and War Machine Starter Set will be the first annual starter set that is not linked to a larger release. This set features fan-favorite characters like Iron Man, War Machine, Howard Stark, and Rescue and reveals versions of Iron Man’s armor NEVER-BEFORE SEEN in Dice Masters along with new takes on 8 Marvel Dice Masters heroes!

One great thing about the Dice Master starter sets are how affordable they are, and with this set you won’t need to worry about trying to get a full set as it’s not tied into a larger set.  If you haven’t gotten into Dice Masters yet, this is a great way to get familiar with it.