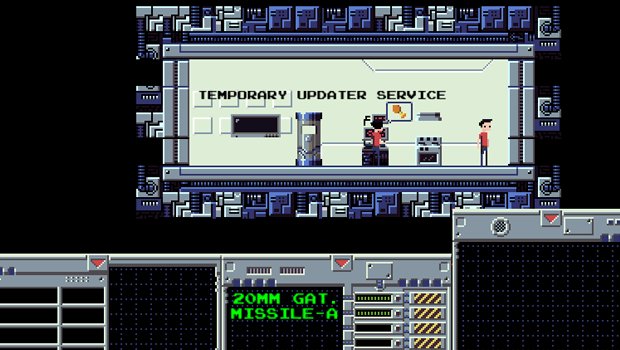 Off in the land of indie game development, Interstellaria has surfaced – and is looking like a title with some considerable potential. Being offered as a title inspired by a mix of FTL, Metroid, Starflight and Mega Man, this is a pixel-art sci-fi game with an emphasis on exploration, crew management and sandbox gameplay. That… is pretty damn aggressive. Of course, aggressive plans are the easy part – execution is where a game will either be made or broken. So far, however, Interstellaria seems to be chugging along well in that capacity, and the art style in particular is one I’m really enjoying. Very old-school, but polished at the same time.

-Explore planets in a platformer mode. Each planet has its own challenge. Some are simple run/gun, others are more puzzle based, while some are open world ala metroid.
-upgrade your player! Several upgrades (armor, utilities) are available for sale on different planets. Many of the most important weapons and upgrades are only available by beating the planets main challenges.

-Take a page from the Sims – your crew are not only important but they are also unique.
-Crew have traits that make them valuable, or a nuisance.
-Crew must eat, sleep, interact, and be entertained to be at their best.
-Crewmen learn as they use their stations. Nothing is worse than losing your master engineer, and nothing is better than seeing your novice gunner level up to a journeyman gunner for that extra bonus to damage and accuracy!

-Manage stations and give orders instead of direct combat.
-Put out fires, maintain oxygen, repair hull damage, and keep your crew alive!
-Fend off intruders!
-Several different kinds of ships planned for the player to buy and pilot
-Stations can be purchased and placed in position by the player

The sandbox aspect of the game is dependent on the game picking up a following leading up to its release, or so says the creator – so if you like what you’re seeing here, be sure to drop by the indiedb site and show some support, not to mention spread the word among your friends. Here’s hoping this one comes out and manages to live up to the benchmark set by its creator.