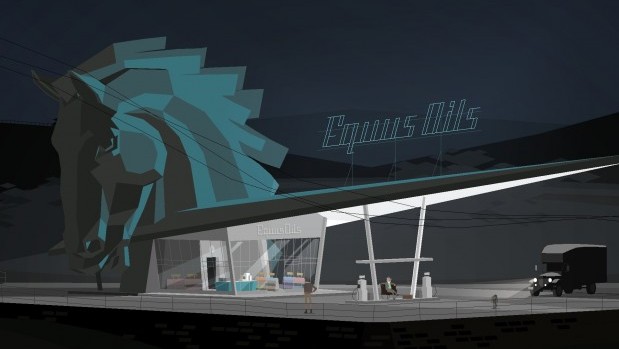 Day 2 of GDC continues with a talk by Jake Elliot, one half Cardboard Computer, the team behind the enigmatic Kentucky Route Zero.  According to Elliot, the team’s fascination with ’60’s experimental video and focus on character driven mysteries instead of puzzles were instrumental to the both the game’s financial and artistic success.

The talk began with Elliot describing his the love of early ’60s experimental and structuralist filmmakers, citing inspirations from Werner Herzog, David Lynch, and Akira Kurosawa.  Elliot noted how some aspects of the game were directly influenced by experimental films, citing a scene in Kentucky Route Zero which mimics the 1967 Canadian film Wavelength.  Soon after beginning of the talk, Elliot started an experimental film of his own playing over the large screens in the room, mixing black and white driving footage with scenes from a 1985 television film version of Death of a Salesman.

After wrapping up his discussions of his team’s influences, Elliot moved on to describing the origins of the game.  He joked that the original idea for Kentucky Route Zero was a “half-baked idea that I had for a sort of metroid-vania platformer where you played a giant carrying around two people on his shoulders.”  He added it was a goal to “come up with a game that was literally just about making friends.”

As he discussed the creation of the game, Elliot constantly made references to the difference between puzzles and mysteries as defined by Gregory Treverton.  Treverton indicates that a puzzle can be solved, provided you have all of the information, but with mysteries one never knows what information is relevant to the solution, how much of it is relevant, or if the solution even exists.   Quoting Treverton, Elliott said “A mystery can’t be solved, only framed.”

Elliot says that he and his team found mysteries much more interesting than traditional puzzles but where Treverton applied them to military thinking, Cardboard Games applied them to economic problems.  “The mysteries we’re concerned with in this game are credit default swaps and other precarious mysteries of finance–things like payday loans, sort of predatory lending, practices, health insurance, even healthcare.”

At the end of the talk, Elliot admitted that he doesn’t have all of the answers.  “In the spirit of mystery, I’d rather not try to sum anything up, but I’m definitely happy to take questions.”