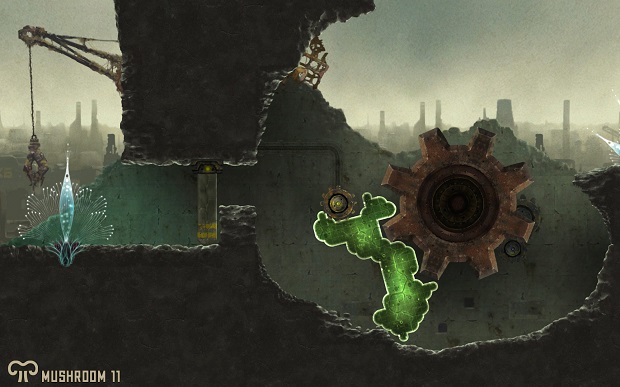 Mushroom 11, a truly innovative and mold-breaking game from indie studio Untame, will be released on October 15. Many games may claim to defy genres, but this one seems to come closer than most. It’s been called a puzzle platformer, but that’s only one piece of the full picture.

You play as an amorphous fungal organism wandering the broken expanse of the Earth. Humanity has been completely wiped out, but you’re thriving. To explore environments, you must constantly reshape your mushroom, growing and shedding cells as you progress. Along the way, you encounter other strange creatures and learn more about the catastrophe that left the world in this state.

The unique gameplay is paired with interesting post-apocalyptic scenery and a quirky electronica soundtrack composed by The Future Sound of London. During its years of development, it has received honors such as IGF Excellence in Design and SXSW Gamer’s Voice nominations, as well as the Best Game Design award on the Sense of Wonder Night at the 2015 Tokyo Game Show.

Mushroom 11 comes out for PC, Mac, and Linux in October 2015, and a mobile version is slated for 2016. To learn more, visit the official website here.