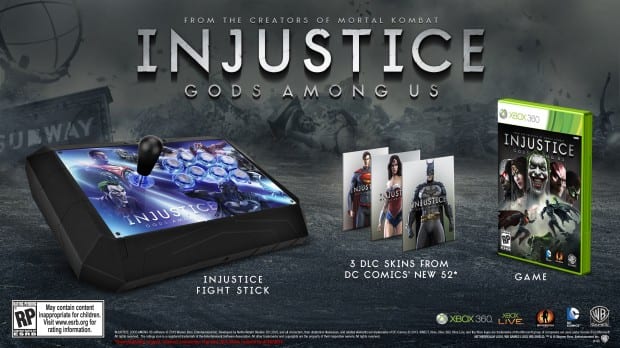 Injustice: Gods Among Us is already shaping up to be everything that Mortal Kombat Vs. DC Universe wasn’t — a brand new fighting system, tons of DC super heroes, and a story to tie everything together. Warner  Bros. Interactive has just announced a release date of April 16th for the upcoming comic book brawler. To celebrate its impending release, Warner Bros. will be releasing two different special editions of the game — along with the already announced Collector’s Edition, dedicated fighting game fans can grab the Battle Edition, which comes with 3 DLC skins from DC Comic’s New 52 reboot, as well as a custom Injustice Fight Stick, and will be available for Xbox 360 and PlayStation 3 at GameStop in the United States and Canada.

From the press release:

The Injustice: Gods Among Us Battle Edition will retail for $149.99 and includes the game disc, exclusive Injustice: Gods Among Us Fight Stick featuring official artwork from the game and three exclusive skins based on Batman, Superman and Wonder Woman from DC COMICS – THE NEW 52. The Fight Stick is a lightweight controller that boasts a non-skid foam underside, a lockout feature for the Start, Select and Guide buttons, as well as adjustable illumination for the buttons and joystick.

Also available is the Injustice Collectors Edition, and for a cool $99.99 fans will get:

·         Special Collector’s Edition of the Injustice: Gods Among Us comic book

·         Three exclusive skins based on Batman, Superman and Wonder Woman from DC COMICS – THE NEW 52

There’s even a prequel comic book, with issues to be released every week digitally, then collected in print in sets of three up to the release of the game. Digital comics will cost $.99 each, and can be found here.

Excited yet? We sure are. Injustice: Gods Among Us will be released April 16th for Xbox 360, PlayStation 3, and Wii U.