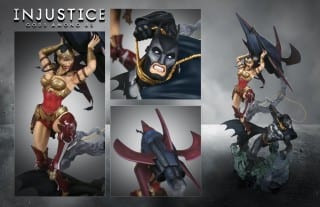 You know what would be sweet?  A cybernetic Wonder Woman strangling Batman with the Lasso of Truth while about to bludgeon him with a 1940s-era rocket, would be sweet.  Well, for $100 bucks, you can get a 13-inch tall statue depicting just that in the Collector’s Edition of Injustice: God’s Among Us.  But if by some miracle, that isn’t quite enough for you, the entire list of availible content follows:

The North American Injustice: Gods Among Us Collector’s Edition will include:

·       Three exclusive skins based on Batman, Superman and Wonder Woman from DC COMICS – THE NEW 52

Injustice: Gods Among Us is shaping up to look like a really cool fighter.  Who wouldn’t want to beat up DC superheroes and supervillians?  Well, you’ll get your chance in April 2013, on Xbox 360, PS3, and the Wii U.  Wanna see what it looks like full-sized?   Click the picture below for all the sexy.