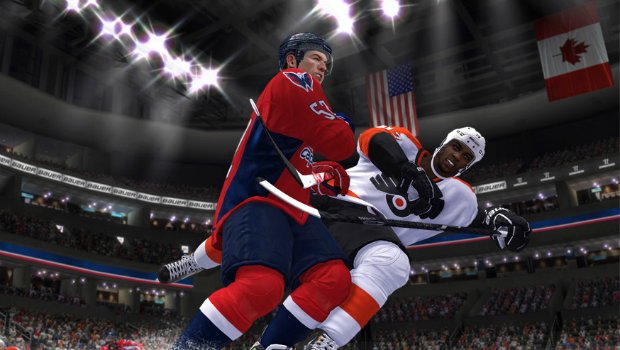 The second of three Developer Diaries for the upcoming NHL 14 has been released, giving awaiting fans of the franchise a look at the updated graphics, physics, and animations, as well as a taste of improved gameplay through the implementation of One-Touch Dekes.

Building on last’s years introduction of True Performance Skating to the franchise, the successful physics engine has been tweaked to better balance both sides of the puck.  Defenders will look up-ice at incoming forwards to take better defensive lines and get more stops.  Defenders will not strafe into position, rather than just skate up-ice and be easily beat in the corners.  Pivots and high-speed turning has also been improved, allowing for more control on offense and defense.

The most exciting new feature is One-Touch Dekes, a simplification of the most fun and spine-tingling move in hockey.  Previous NHL titles have required the use of both sticks and a button to complete dekes, which is not only clunky for the animations (having multiple inputs from both sticks) but also for the player, who is trying to wrap his hands around a giant Xbox 360 controller and shimmy-shake two defenders at the same time.  This new mode will allow dekes with the use of only the left stick and a quick hold a button, and improved animations and puck control show promise for lightning quick, accurate ankle breaking out on the digital ice.