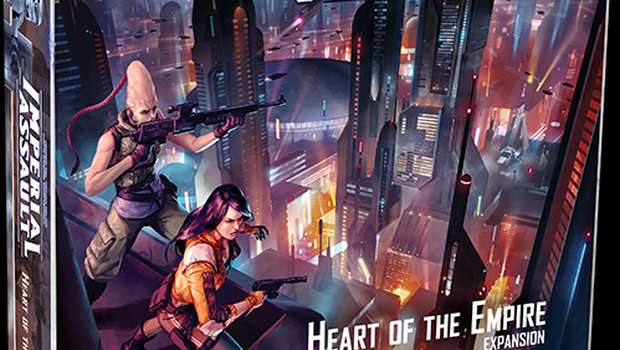 Coruscant is an iconic location in the Star Wars universe.  Any Rebels exploring there need to tread lightly.  It’s not surprising that the next Imperial Assault expansion, Heart of the Empire, would take place here.

Coruscant, capital of the galaxy. This globe-spanning metropolis is the home of Emperor Palpatine and countless other beings. It is also the home of countless mysteries, including the location of an ancient artifact of incredible importance…

Fantasy Flight Games is proud to announce the upcoming release of Heart of the Empire, a new expansion for Imperial Assault!

Adventure among the awesome Coruscant cityscape, and face its myriad dangers. Only the bravest rebels dare to operate here, but when it becomes vital to locate an ancient artifact before the Emperor can claim it as his own, you’ll set forth on a new, highly replayable campaign of sixteen missions that explore every level of the world, from its glistening halls of power to its grimy underworld alleys.

You’ll find three new heroes ready to join the Rebellion, aided by the talented Force user Ahsoka Tano. You’ll maneuver through the crowded city, pursued and confronted by Imperials at every turn. And you’ll find the Emperor isn’t the only major player working against you. The former Sith, Maul, has sent a Clawdite Shapeshifter to pursue the artifact, and any face in the crowd might hide the Shapeshifter’s true identity.

Ready to evade the Empire on their own home turf?  Take a look at this page for more information.