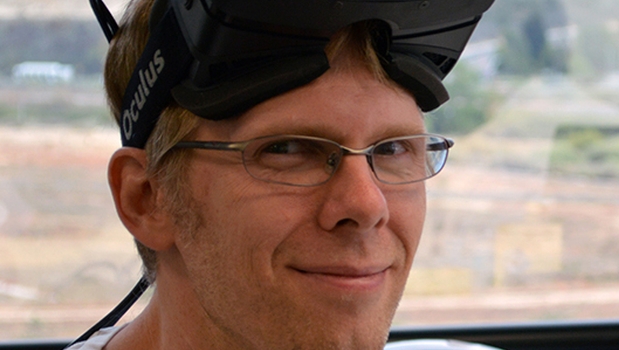 Co-founder of id Software and head designer for many games in the Wolfenstein, Doom, and Quake franchises John Carmack will be joining the company “Oculus.” As you can guess, Oculus is the crew responsible for the Oculus Rift, the virtual-reality headset that has gained fame since a developer prototype was sent out to the products Kickstarter backers a few months back. The Oculus company is headed by Palmer Luckey.

“I have fond memories of the development work that led to a lot of great things in modern gaming–the intensity of the first person experience, LAN and internet play, game mods, and so on,” said Carmack in a statement. “Duct taping a strap and hot gluing sensors onto Palmer’s early prototype Rift and writing the code to drive it ranks right up there. Now is a special time. I believe that VR will have a huge impact in the coming years, but everyone working today is a pioneer. The paradigms that everyone will take for granted in the future are being figured out today; probably by people reading this message. It’s certainly not there yet. There is a lot more work to do, and there are problems we don’t even know about that will need to be solved, but I am eager to work on them. It’s going to be awesome!”

Many have questioned what this means for his role as id Software. ZeniMax issued a statement on that question earlier today…

“John has long been interested in the work at Oculus VR and wishes to spend time on that project,” said a company spokesperson. “The technical leadership he provides for games in development at id Software is unaffected.”

You have to imagine that opening a new Oculus studio like Carmack is doing will affect his role at id in someway, though they say otherwise. Time will tell, I suppose. Lets just hope that the Oculus Rift keeps improving! That thing looks impressive.