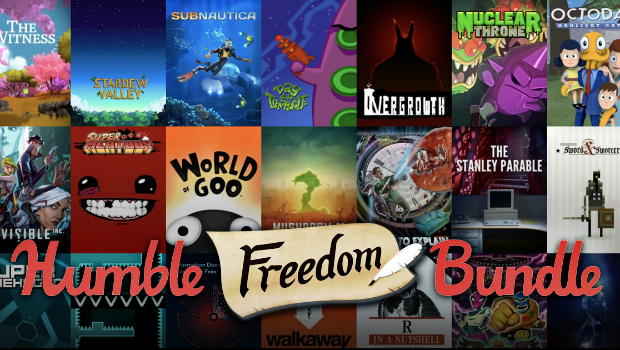 Humble Bundle, Inc’s current offering of games, pointedly titled the Humble “Freedom” Bundle, has made over $4.7 million in total payments since its launch three days ago. The bundle now includes nearly 60 games, as well as some ebooks, videos, and an album download.

The notable success of this charitable promotion was celebrated on Twitter by several of the creators offering up their games for the bundle.

Almost $4.6M raised! All the thanks goes to the people donating $$$.They are the heroes. Go join them, go be a hero. https://t.co/xlVE2O8SOr

The Freedom Bundle is doing great, over $4 million raised so far!
But it gets crazier; new stuff will be added to the bundle this afternoon!

While earnings from most bundles are split between the featured developers and a selected charity, all proceeds from the Freedom Bundle are going to the American Civil Liberties Union, Doctors Without Borders, and the International Rescue Committee, as an outspoken response to the president’s recent immigration ban.

In a statement to Ars Technica, Humble Bundle’s Jeffrey Rosen said: “We stand together in dismay over Trump’s recent immigration ban. We find it to be un-American and damaging to global businesses like ours.”

The Freedom Bundle launched three days ago, offering 40 games — with headliners like The Witness, Stardew Valley, and Super Meat Boy — all for a starting donation price of $30. Nearly 20 more games have been added to the list since then, and the promotion still has another four days.

Here’s a list of every game you get through the Freedom Bundle: