Christian Elverdam and Rune Wandall-Holm give us a demonstration of the pre-alpha build of Hitman: Absolution this morning, showing off the title on the PS3.

Our demo opens up in rainy Chicago, and there is a citywide manhunt for Agent 47.  Holing up in a derelict library, Agent 47 finds himself in unfamiliar territory – the hunter has become the hunted, and he is unarmed. The team from IO want to create a living breathing world with an AI capable of nuanced behavior instead of the binary ‘chase/don’t chase” behavior of previous games. Additionally, they want to introduce the concept of “instinct” – the power that enables 47 to be the most lethal killing machine this world has seen. Most importantly, they want players to feel true freedom of choice.

Demo begins:
Looking out of the dirt encrusted window, we suddenly see 47 burst through the glass. Three police officers call the building all clear as they pan their flashlights through the area.   Steeling ourselves with some breaths, we lower ourselves down to the second story balcony.  A group of five police offers are lead by a Sergeant barking orders and calling for blueprints of the building. The derelict library has covered and overturned bookcases as well as various other semi-permanent hiding places.

The instinct mode that IO has introduced is a new feature for the series – it allows 47 to see through walls, as well as gaining the ability to see a sort of red fire-trail for the patrol route or intended destination of an enemy.

Sounding the all clear for the area (and thanks in large part to our Instinct) we move in behind the officers. Using X to perform a “Cover to Cover” roll between bookcases, we stick to the shadows. Unfortunately for us, the officers turn on the lights, but the fuses are arcing and sparking which is causing the the lights to flicker.  As we roll in behind Officer Tozano (the guy working on the fuses) we see a small arc threat indicator of visibility from a nearby officer. Having sabotaged the fuse box, another guard and Tozano leave the area to investigate, clearing the path to the Reading Area of the library.   Taking down an officer we whisper “Shhhh” and choke him out. There are at least 10 officers in the room, looking around and using their lights. Finding a power cord on the ground, we now have an improvised Garotte.  Taking down an officer, we have the option to drag his body , but quickly another officer says “Where’d he go?”, noticing that he’s gone. He glanced around, but didn’t pursue, but unfortunately our opportunity hide the body was lost.

Making his way through the officers, we slowly approach another improvised weapon – a marble bust sitting on a table. Smashing an officer in the head and dropping him down the hole, we climb a nearby ledge, pulling another officer down the same hole.  Grabbing his discarded baton, we disturb a nest of pigeons, making them fly and

attract attention.   Jumping up to a nearby ledge, we shuffle our way towards the front, but more officers block that area.   Taking another officer by surprise, we snap his neck from behind with the baton, grabbing a Mack 22 pistol in the process.  Sneaking up on poor Officer Tozano, we take him as a human shield, attracting a lot of attention as we back slowly out of the front entrance, using him as a human shield.  Snapping his neck, we run up to the third floor. Gunning down officer, we find ourselves well pinned.  Climbing further up, we shoot the chain on a chandelier, sending it crashing down to the bottom floor.  Breaking down the door we stand in the rain-soaked city once more as helicopters use spotlights to track our escape.

Running along the rooftops, a police helicopter tries to use spotlights to track us. Their blades disturb nearby birds, blow cloth, and their machine guns will disturb far more than that.  Taking a leap of faith to another nearby building, the chopper warns another officer that the suspect is headed his way.  We prove that point by grabbing him as a human shield and executing him. Taking his uniform, we can now blend in as an officer. Walking in plain view of the chopper doesn’t attract their attention as we saunter towards another building. This hippy-bead place has posters that say “Revolution!” and “Fuck the Cops”.  Four hippies in some beatnik pot-shop watch through the windows as they think their stash is about to be raided. Using the nearby bong we picked up, we knock out two cops with a smash to the head and a knee to the face causing a nearby hipster to remark “Police brutality, awesome!”

The cops begin knocking on doors and shaking residents down as we enter the elevator to head down to the bottom floor.  The bellman remarks how he’d be shitting himself and is glad that us cops are here to protect and serve from dangerous son of a bitches like this assassin character.

As we walk past suspicious officers, we tip our hat, hiding our face in slow motion.   Grabbing a donuts from a nearby box gives us a chance to look inconspicuous as a group of SWAT officers run past.  Moving into the crowd, we blend in among the hundreds lining the subway platform, closing the demo. 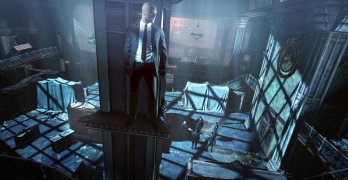 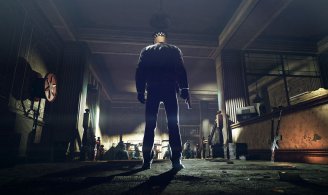