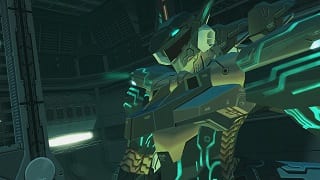 I have to come clean on this one: I love the Zone of the Enders franchise.  I admit that the story is a bit hokey, and the games let Kojima indulge in the worst of his over-long moralizing cutscenes  But the games are so clearly a labors of love, the world was so interesting, and the music is so good that the games overcome their flaws.  Plus, how can you possibly hate a game with giant sword-fighting robots?

Well, all you other ZoE fans are in for a treat: the two main games of the ZoE franchse are getting an HD remake for PS3, XBox 360!.   Details of the package:

I’m pretty excited about this.  These games were beautiful on the PS2.  The graphics had a really incredible sense of style, and should look great with better textures and higher resolutions.  As a bonus, you’ll get a CD with remixes of the games excellent soundtrack, as well as a 100 page artbook.

Included in the HD Collection is a demo for the next Metal Gear Solid game: MGS: Revengeance.  Considering the packed-in Metal Gear Solid 2 demo was one of the biggest reasons the original ZoE game sold as well as it did, this is a real treat.

You’ll be able to get your hands on the ZoE HD collection on October 30th for PS3 and Xbox 360.