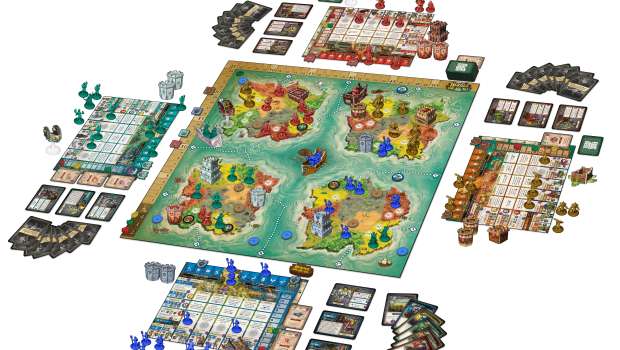 Sometimes Kickstarter projects just don’t do well their first time around, but come back to resounding success.  While the Tiny Epic series has had a lot of success on Kickstarter, the designer Scott Almes has a new big box game there now.  Heroes of Land, Air and Sea has officially relaunched on Kickstarter.

Heroes of Land, Air & Sea ​is a WARCRAFT® inspired big box game. It has an RTS feel with 4X game play. It breaks the mold of regular 4X games in that it is easy to learn, simple to play, and games only last 2 hours. It is a Scott Almes design after all, designer of the Tiny Epic series.

This is the classic tale of Humans vs Orcs (Includes 8 factions total) ​and the warring factions of a fantasy realm. It is a game of territory control, resource management, mastering your faction and exploiting your opponent’s weaknesses.

Comes with over 160 highly detailed Miniatures and 3D Cardboard Constructs.

For a game like this to play in two hours, that’s an impressive feat.  The figures look fantastic, and they have some great cardboard pieces that the figures fit into.  Having up to eight factions should give it plenty of replayability. Be sure to check out the Kickstarter now.