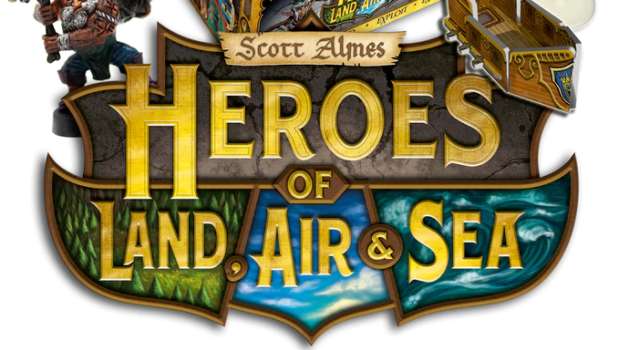 I have been impressed with Gamelyn Games and how they package a great experience in a small box.  With the size of game boxes these days, it’s refreshing to see small games come out.  The Tiny Epic series has been a great example of this.  However, Gamelyn Games is moving in the opposite direction with the latest Kickstarter, making a big box game called Heroes of Land, Air, and Sea.

Heroes of Land, Air & Sea breaks the mold of regular 4X games in that it is easy to learn, simple to play, and games only last 2 hours. It is a Scott Almes design after all, designer of the Tiny Epic series.

This is the classic tale of orcs vs humans, and the warring factions of a fantasy realm. It is a game of territory control, resource management, mastering your faction and exploiting your opponent’s weaknesses.

Featuring Pre-Painted Minis
Heroes of Land, Air & Sea will feature something rarely done in the Kickstarter world. Pre-Painted Minis! The sculpts are done by the fine hands of Chad Hoverter (Mice and Mystics, Spector Ops).

This obviously sounds a little like a very popular PC franchise, but I’m certain that Scott Almes will have his own twist on it.  Being able to play a 4X game in two hours is a huge accomplishment though, and I’m curious to see how it plays.  For more information, check out the Kickstarter page.