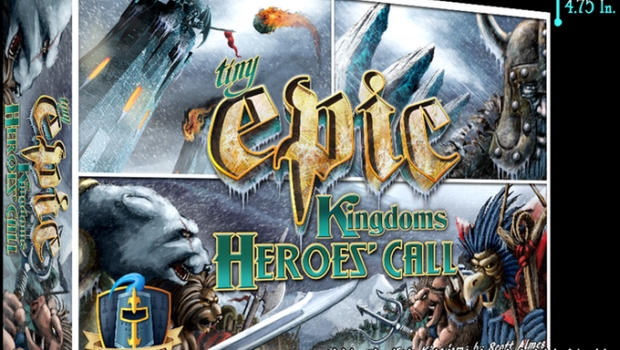 Gamelyn Games is known for putting big experiences in small boxes, as has been seen by their Tiny Epic games.  Now they are expanding the Tiny Epic line again, but not by making another game.  Instead, they are producing an expansion for Tiny Epic Kingdoms called Heroes’ Call.

Tiny Epic Kingdoms Heroes’ Call, promises TEK players more of what they love and more than they could even imagine!

THE WAR CONTINUES AND SPREADS FURTHER AND FURTHER. NEW FACTIONS HAVE ARRIVED FROM THE NORTH IGNITING EPIC BATTLES UNLIKE ANY BEFORE. HEROES RISE OVER THE FALLEN BODIES OF THEIR ENEMIES. KINGDOMS SPREAD ACROSS THE FROZEN WASTELANDS AND THROUGH THE SNOWY PEAKS IN SEARCH OF SILVER. WAR TOWERS GROW TALLER THAN THE TREES. WHO WILL BE VICTORIOUS IN THE END?

If you have Tiny Epic Kingdoms and want to upgrade to TEK 2e, don’t worry we got you covered!

You can get both the updated Second Edition of Tiny Epic Kingdoms as well as the Heroes’ Call expansion from the Kickstarter page.  If you haven’t seen these games before, now is a great time to check them out.