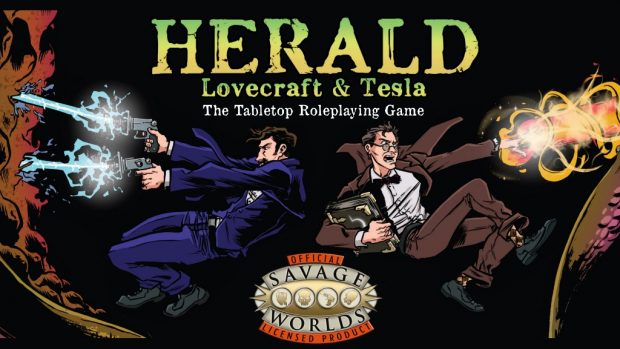 Pinnacle Entertainment Group has been very busy recently with its releases, and they are in no mood to stop their train now. Ending August 15th, Pinnacle will finish their Kickstarter for Herald, a Savage Worlds game set in the Action Lab comic series. Nikola Tesla and H.P. Lovecraft join together to fight the forces of the occult, and now you can be a part of those adventures.

Herald the Tabletop Roleplaying Game gives you the chance to make history as you investigate clues, fight unspeakable creatures, design your own technologies, and uncover the mystery and adventure of the pulpy world of the 1920s… all while trying to maintain your sanity.

These are the days of new technology, of cults and magic, everyday items imbued with extraordinary powers, talismans, coded messages, mysterious trans-Atlantic plane disappearances, kidnappings and crooked businesses, mafia-controlled moonshine production, the jazz age, the stars of the silent film era, the scientists and explorers who opened our minds and expanded our brains, the age of astronomical discovery and the adolescence of quantum physics, the first automatons, the blinding era right after the
Great War, the days your great grandparents barely survived.

Prepare yourself. There are terrifying things arriving from beyond the stars.

H.P. Lovecraft teams up with Nikola Tesla, Amelia Earhart, Albert Einstein, Harry Houdini, Sonia Greene, Marie Curie, Babe Ruth, Josephine Baker, Jack Dempsey, Charlie Chaplin, Clara Bow, Kandinsky, Trilussa, Keaton, the list goes on and on. Many joined the fight against the Cthulhu Mythos creatures who invaded our world in the 1920s. But this is no ordinary Call-back to Cthulhu style TTRPG, this is as much afbout the history and personalities of the notable figures alive in this exciting era.

Herald is nearly funded but only has a few days to go before the campaign is over. Make sure to check it out as well as the original comic.