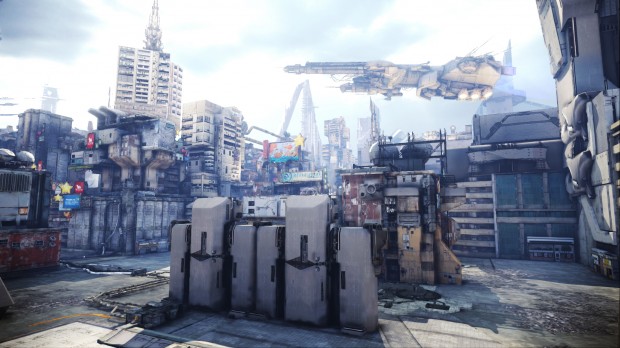 Jason Hughes’s voice failed about ten minutes into the interview.  It was Friday morning–the final day of GDC– and so it really shouldn’t have been a surprise to anybody. As a producer at Adhesive Games, he’d spent most of the past week talking with fans, press, and other developers.  I offered to pause so he could get some soothing tea, but he decided to soldier on, laying out both the history and future of his team’s free-to-play mech shooter Hawken.

[singlepic id=11413 w=320 h=240 float=left]Hawken is one of the two major players in a brewing battle between competing mech-combat game, and though Hawken was announced first, it’s main competition has decades of history and lore behind it.  That doesn’t seem to bother Hughes much, explaining that Hawken’s own lore was introduced in the just-launched graphic novel Hawken: Genesis.  “It’s a fight over energy,” Hughes said, explaining that the battles in Hawken represent a war between powerful corporate interests and an underground resistance on a desolate, overpopulated world.  But that was only a portion of the Hawken story.  “Outside of the book, outside of the graphic novel we have a sort of ‘Hawken Bible’ which contains a lot of Hawken lore.”  He admitted that it’s not always easy to squeeze lore into a game without a single player campaign.  “It’s a multiplayer game, so we’re kind of limited in terms of narrative, so we have to tell the story through visuals, through logos on the map, and so on.”

When asked why he decided to revitalize the long-dormant , Hughes shrugged.  “It’s a very just ‘real’ story,” he said.  “It was: ‘Wow, mech games are cool.  We haven’t seen any mech games in a while; let’s make one.’ ‘Okay.’”  He continued by explaining how that affected the setting and lore–he and his team realized it would be easier to make a near-future mech combat game than to try and compete in the saturated modern military shooter.  “If you only have five or ten people working on a project, you have to be very smart about what you spend your time on.”[singlepic id=11412 w=320 h=240 float=right]

One constant worry for the team behind Hawken is balancing the action, in part because the game’s community is extremely quick to voice their complaints.  “There are some people who are very vocal,” Hughes rasped.  “We’ve had players who have been playing since alpha.  They play every day–they have over 500 forum posts!  That’s absolutely crazy!”  Hughes was quick to point out that the team does accept advice from the forums,but they don’t let it run their game.  “We just have to stay focused on the design that we have.  We take feedback for polish, but we have to have confidence in what we’re doing.”

Hughes was a bit apprehensive about the community’s feedback on the next upcoming patch, which will introduce a new map and a new mech to the game’s lineup.  The new map is meant for the game’s signature siege mode, where teams compete to launch massive battleships against one another.  The new mech–the Technician–is unique in the Hawken universe, as it’s the first and only mech to fill the role of a medic. According to Hughes, “It’s really just a support class–it can deal damage, but you’ll do better if you help other people do damage.”  When he showed a video of the mech–which you’ll find below–it became apparent that the healing mechanic features a sticky healing beam, much like Team Fortress 2’s medic class.

[singlepic id=11414 w=320 h=240 float=left]Looking forward, Hughes expects Hawken to officially launch before the new year, but admits that there’s a lot of work left to get there.  “No specific date,” Hughes said, “because we’re driving it by asking ourselves ‘Are we to version 1.0 yet?’”  New features to implement before the game’s official launch include updates to the new user experience, improvements to matchmaking, and  a raft of new mechs and maps.   When I prodded Hughes to give a general timeframe for launch, Hughes laughed and shook his head. “It’ll be done when it’s done.”