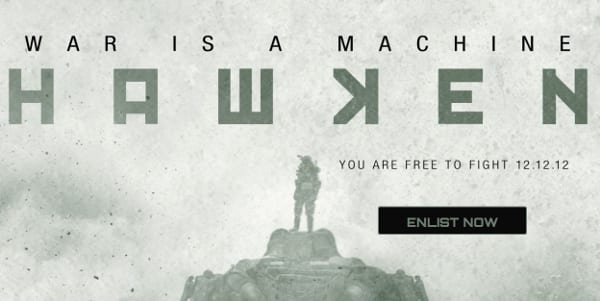 MechWarrior Online isn’t the only giant robot stompy-adventure coming down the pike.  Courtesy of Adhesive Games, we also have the absolutely beautiful first-person mech title Hawken.  Today we get a formal announcement of the closed beta date – specifically October 26th through the 29th for the initial wave.   Here is what the ambitious team at Adhesive had to say about earlier Alpha phases of testing:

“The team has worked tirelessly to launch closed beta. Thanks to the awesome community, we learned a great deal from the Alpha 2 feedback,” said Khang Le, Creative Director and Co-founder of Adhesive Games.  Le goes on to exclaim, ”We’re super excited about opening the gate and having a larger fan base playing HAWKEN for the very first time! I can’t wait to see how the general audience receives the game and all the crazy tactics they come up to dominate on the HAWKEN battlefield”

“HAWKEN’s Alpha 2 testing was great. We broke a lot of things and that’s good. The more that we find wrong now; the smoother open beta will go,” explains CEO of Meteor Entertainment Mark Long. “We scaled up an order of magnitude in daily players and the server ping was so good we had players on the West Coast of the United States joining the United Kingdom servers.  We cannot wait to see what happens as more players join in on closed beta.”

The game was fantastic to play at E3, but I can tell you (without violating my NDA) that the current Alpha is so much better.  Hawken is free to play and could easily be a boxed product…it’s that good.  Look for more on Hawken as the NDA restrictions ease.  I’ll see you on the battlefield.    Click right here to register your pilot name!