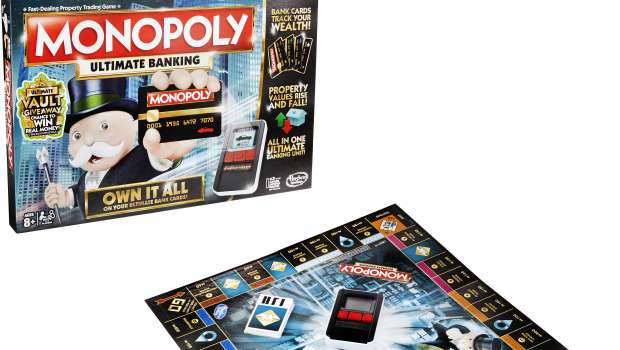 It seems that Monopoly has come out with several different editions, whether it has been new rules or a new theme.  Now Hasbro is changing up Monopoly with a new cashless game and the ability to win some money in the process.

To help celebrate the launch of the cashless MONOPOLY ULTIMATE BANKING game, the iconic MR. MONOPOLY has decided to give away part of his fortune to his fans in the MONOPOLY Ultimate Vault Giveaway. Inside specially marked MONOPOLY ULTIMATE BANKING games, U.S. fans will find a promotional Vault Giveaway Card that they can tap on the Ultimate Banking Unit and check MonopolyVault.com to see if they are a potential winner of a piece of MR. MONOPOLY’s fortune. Eligible fans will have a chance to win prizes ranging from USD $5 to USD $20,580, the latter of which is the total amount of money in a standard MONOPOLY game.

“We continue to keep the MONOPOLY brand relevant for today’s fans and have introduced the MONOPOLY ULTIMATE BANKING game to reflect how many of today’s financial transactions are happening without cash,” said Jonathan Berkowitz, senior vice president of global marketing for Hasbro Gaming. “The MONOPOLY Ultimate Vault Giveaway is an exciting way to help celebrate the game’s launch and give back to our fans by letting them ‘tap into’ MR. MONOPOLY’s wealth.”

The new MONOPOLY ULTIMATE BANKING game from Hasbro (NASDAQ: HAS) trades in the game’s signature MONOPOLY money for an Ultimate Banking Unit and readable bank cards, event cards and title deeds that allow players to buy properties, collect rent and track their wealth with a simple tap. The fast-paced, dynamic gameplay includes rising and falling property values and life events such as market crashes and fluctuating rents that can change players’ luck in an instant. The MONOPOLY ULTIMATE BANKING game is now available for ages 8 years and up for an approximate retail price of $24.99.

The world’s favorite family game brand, MONOPOLY, is enjoyed by more than one billion players in 114 countries across the globe and has a Facebook fan page of more than 10 million followers. Fans can engage with the MONOPOLY brand across many platforms and formats including live events, fashion licensing, digital gaming, casino gambling and more. Stay updated on the latest MONOPOLY brand news at Monopoly.com and join the conversation at Facebook.com/Monopoly or by following @HasbroNews on Twitter and @Hasbro on Instagram.

The MONOPOLY Ultimate Vault Giveaway is open to U.S. residents 18 years and older and runs from August 15, 2016 to January 15, 2017. No purchase is necessary. For official rules and terms and conditions, visit www.monopolyvault.com.

I am hoping that some of the additions will help speed up the game.  The ability for the computer to keep track of who owns which properties and take care of rent should help take out the fiddliness, but let’s hope that the market crashes and fluctuating rents don’t prolong the game too long.  Still, I’m glad to see Hasbro taking some chances with the traditional Monopoly formula.