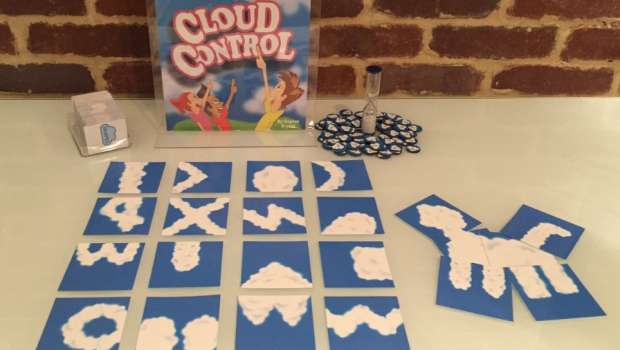 Last year Hasbro created a contest with Daymond John of Shark Tank to find a new board game to add to their repertoire.  After several months and campaigns on Indiegogo, they have finally announced the winner.

The Fall 2016 Gaming Challenge offered independent game designers a prominent platform to promote their ideas, while enabling Hasbro to discover and develop new face-to-face games. The winning game, Cloud Control, created by Eugene Bryant of Suwanee, Georgia, is an endearing, family-friendly game that allows kids to turn, twist, overlap and animate cards to form clouds into recognizable shapes before time runs out.

“I had a great time as a guest judge for Hasbro’s Gaming Challenge. I’m a big fan of family games and these submissions all showed tremendous creativity and talent,” said Daymond John. “I was impressed by the five finalists, but in the end Eugene’s Cloud Control resonated with me the most.”

Cloud Control was one of five finalists in Hasbro’s Fall 2016 Gaming Challenge which raised more than $22,000 across all five campaigns. Each of the selected finalists ran crowdfunding campaigns that were promoted on Hasbro’s partner page on Ingiegogo.com. The final Indiegogo campaigns closed on February 12, with ‘Cloud Control’ raising more than $6,700 from more than 180 backers.

“Successful game ideas can come from anywhere, and the Gaming Challenges helps us uncover the best of the best for Hasbro Gaming fans,” said Brian Chapman, head of design and development at Hasbro. “We were thrilled to bring the winning Mr. Toast Game to life in the 2015 Game Challenge, and are excited to work with Eugene to share the imaginative Cloud Control game with our younger fans.”

Bryant will receive the $25,000 prize and a trip to Hasbro headquarters for advice, mentoring and assistance from Hasbro’s game development team to help make his game a reality. He will also have the opportunity to meet with Daymond John.

“My family and I couldn’t be happier to have won Hasbro’s Fall 2016 Challenge,” said Eugene Bryant. “I’m beyond grateful to my family and friends, who inspired me to create ‘Cloud Control,’ and to both Hasbro and Indiegogo for helping to turn our dream into a reality. I can’t wait to get started on the final product!”

Hasbro’s first Gaming Challenge launched in 2015 and received more than 500 submissions from around the country. The 2015 grand prize winner,  The Mr. Toast Game created by Dan Goodsell of Los Angeles, C.A., is now available at Target in the U.S and finalist ‘Hex Casters’ game is now available on Amazon.

With a team of passionate innovators and designers, the Hasbro Gaming Lab has a mission to discover and develop great new games, connect with the growing gaming community, and bring fresh experiences to gamers everywhere. To learn more about the Hasbro Gaming Lab visit: www.hasbrogaminglab.com.

It’s great that Hasbro gave people the opportunity to design their games.  Take a look for Cloud Control soon.