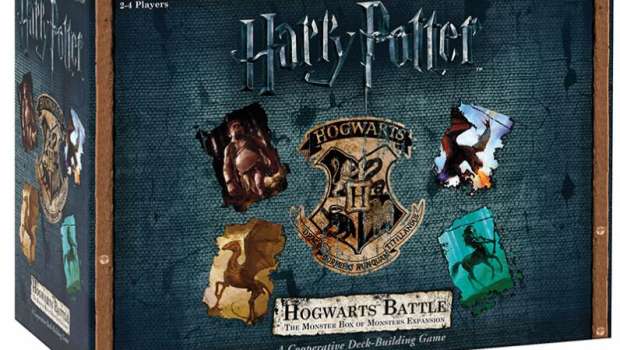 The Harry Potter: Hogwarts Battle deck-building game was popular not only for its theme, but it also gradually introduced people to cooperative deck-building games.  It even followed the storyline of the books, introducing new mechanics after each “Book” was won.  Our review gave it one of our highest scores.  Now USAopoly has announced an expansion for Hogwarts Battle, The Monster Box of Monsters.

HARRY POTTER™: HOGWARTS™ BATTLE game has captured imaginations aplenty since its Gen Con 2016 debut. That’s why we’re thrilled to share that the game which has brought you the joy of exploring the world of Harry and his friends is getting much, much bigger. How much bigger?

The Monster Box of Monsters Expansion for HARRY POTTER™: HOGWARTS™ BATTLE deck-building game adds over 150 new cards to your game. You’ll face new adversaries in the form of magical Creatures, each to be handled with care. Undertake new tests of your proficiency by besting Encounters as you fight evil across new Locations.

So much more excitement awaits:

A new hero joins her friends. One of the most magical of wizarding powers makes its deck-building debut. And breaking the rules of HOGWARTS™ has consequences…

The Monster Box of Monsters Expansion is drawing near. Can you hear the Creatures? Are you ready to face them?

This new deck-building challenge gives fans more of what they love, and it’s coming soon to your local game and toy stores!

It sounds like USAopoly has a lot of surprises in store.  You can go here for more information.