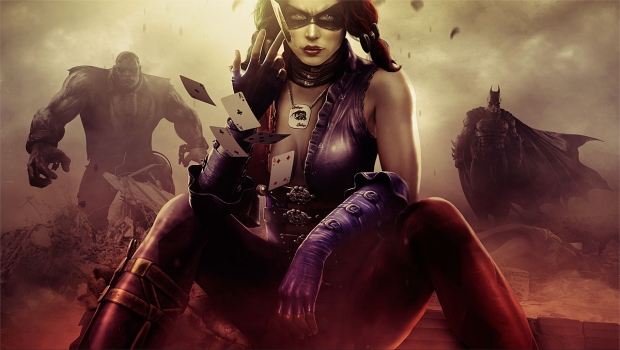 Dr. Harleen Quinzel, better known as Harley Quinn, has joined the all-star cast of Injustice: Gods Among Us and we’ve got video of the demented doctor in action!  Coming from the folks at NetherRealm (you might know them from a little game series called Mortal Kombat?) I’m excited to see how this title comes together.   Here’s a nibble about the game:

Injustice: Gods Among Us is an all-new game in development by award-winning NetherRealm Studios. The title debuts a bold new fighting game franchise that introduces a deep, original story featuring a large cast of favorite DC Comics icons such as Batman, Green Arrow, Cyborg, Harley Quinn, Nightwing, Solomon Grundy, Superman, The Flash, Wonder Woman, Green Lantern and many others. Set in a world where the lines between good and evil are blurred, players will experience heroes and villains engaging in epic battles on a massive scale.

The game is slated to hit the Wii U, PS3, and Xbox 360 on April 16th – it’s also one of our most anticipated titles, so stay tuned for more info as we get it!