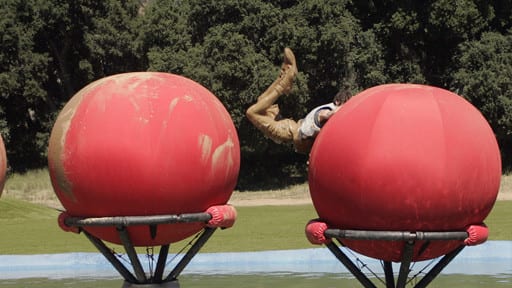 Do you like the taste of plastic and padding?  Then do I have a game for you!   Wipeout: In the Zone, a Kinect-based title set up to simulate the show of the same name, is set to hit shelves on June 14th, and I’ve gotten my first furious hands-waving crack at it!  Similar in execution to the Kinect Adventures game that shipped with the peripheral, the game is a collection of minigame madness made for the whole family.   Let’s bounce on some big balls and find out what’s what.

First and foremost, you’ll note that Wipeout: In the Zone is set up exactly like the ABC Family show.  You’ll select your ‘contestant’ and then Jill Wagner will introduce you before you take on the Wipeout qualifier.  During that time, and throughout the game, John Hensen and John Anderson will provide over 2000 lines of dialog to give color commentary and feedback to the player.  The game is set up in multiple stages, culminating with the Wipeout Zone – the brutal and fantastic culmination of this very authentic game.   The Big Balls, the Motivator, the Wrecking Ball, the Sucker Punch and many other fan-favorites are present and accounted for here.

The game is very simple to pick up and play.  The vast majority of the game is played in a 2D plane looking at the side of the player, so you’ll see the direct results of your actions displayed in that way.   Standing in front of the sensor and running in place will make your character (either a pre-made one or your avatar) jog forward onto the obstacles.   Jogging faster makes your avatar move faster, and everything beyond that is as intuitive as you might guess.   Jumping, ducking, leaning, and dodging all play their role in the gameplay mix.  To stop running or to back up you simply hold your hands forward in a ‘stop’ motion.  The Kinect’s delay is pretty easily compensated around through a little practice, and the ability to skip a section for a bit of a time penalty helps keeps the action moving.

Just like the show, the obstacles are the stars of the show.  This is entirely true in the game as well.   There are Big Balls, Bigger Balls, spinning toothbrush-looking devices, trampolines, pinball-like courses,  sucker punches (the gloves light up earlier so you can dodge them even with the slight delay on the Kinect),  and quite a few even larger fantasy sets to play.  A few unique obstacles came up throughout play including “Mimic the Pose” which gives you a pose to strike and then asks you to duplicate it.  Another obstacle requires the player make a pumping action with their arms to charge up some sweeper fans.   There are 9 total ‘episodes’ to play in the game containing over 50 obstacles, all with varying difficulty levels.

The turn based multiplayer game supports up to 4 players.  The players who aren’t actively tackling the course can sabotage the player by throwing objects at the current player to help trip them up.   In the short bit of time we played it was already clear that this would be a great party game, and that crazy alliances would quickly form.

Even at this stage it was pretty clear that this title will be a big hit for families and friends alike.  The game is set for release on June 14th exclusively on the Xbox 360 for use with the Kinect.   While I’ll be at E3 and can’t review the title during that madness, look for the game to hit shelves on June 14th.   Until then, Good Night, and Big Balls. 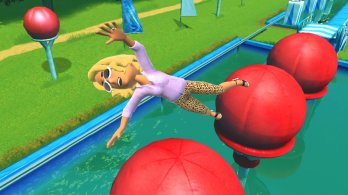 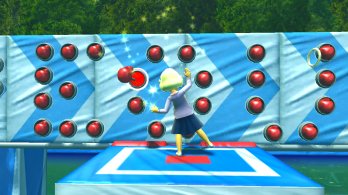 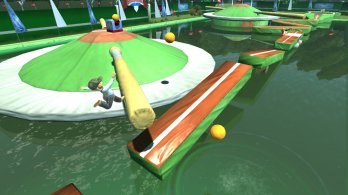 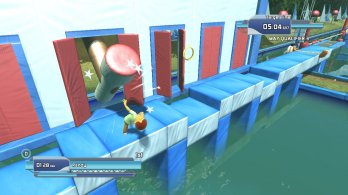 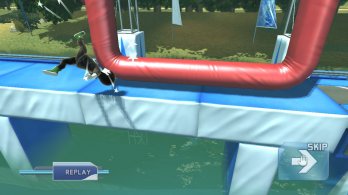 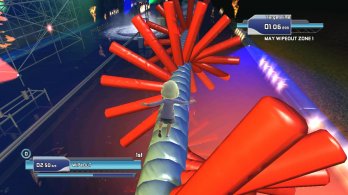 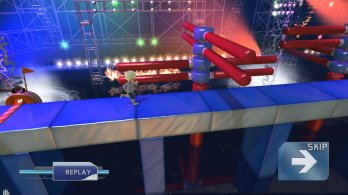