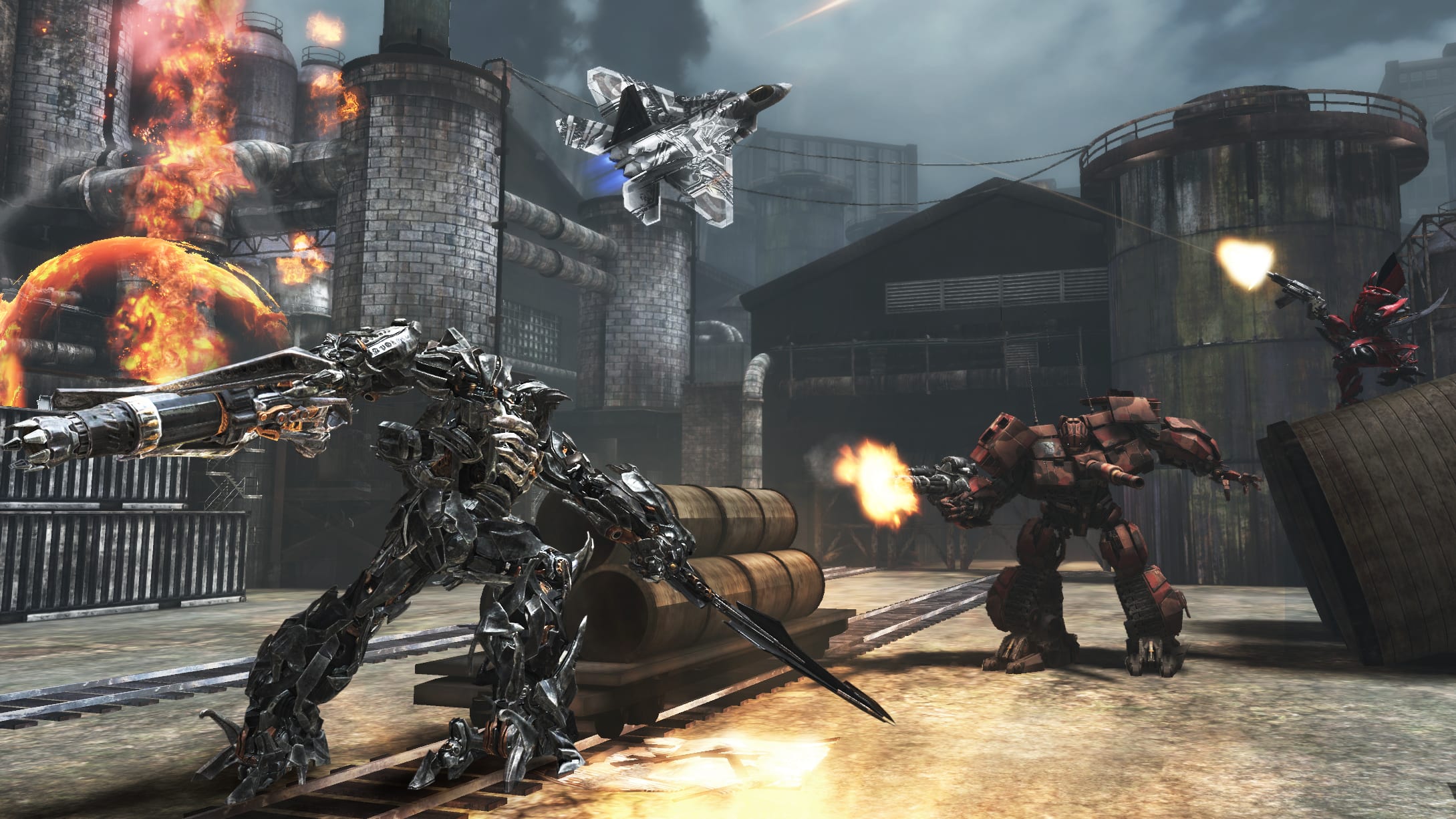 At a recent press event in the always-cool San Francisco I got to get my  hands on the upcoming movie tie-in for Transformers: Dark of the Moon. High Moon Studios, following the success of the War for Cybertron title, is back at the helm developing this latest Transformers outing. At the event they presented two levels of the multiplayer experience as well as four levels of the single player game.

Even More than Meets the Eye
I started off the day with a look at the two levels of multiplayer action.  As you might recall, I heaped heavy praise on the multiplayer aspects of War for Cybertron, and the two modes we got to play of Dark of the Moon look pretty promising. The first thing we played was a vanilla deathmatch mode that pitted five Autobots against five Decepticons in the bid to reach 30 kills first.   The difference here is a shot in the arm from another Activision title.

The first thing I noticed is that you now have four over-arching character classes to select before each level.  You can be a Scout, Hunter, Commander, Warrior, or a custom blend.  The scouts (Bumblebee / Enforcer) are faster vehicles like cars, the Hunters (Breakaway / Starscream) are fast moving jets, the Warrior class are heavy tanks capable of dealing incredible damage, and the commanders are obvious – this is your (Optimus & Ironhide / Megatron & Soundwave) level class.   The classes all get a primary weapon and ability, but you also can earn access to two secondary skills as well as a secondary weapon (for some classes).   These upgrades are unlocked through experience gained at the end of a match in each of the respective classes played during that round.  The upgrades come in the form of various class upgrades and kill streak rewards.  You unlock new chassis, weapons, and skills at level 5, 10, and so on.   If any of this sounds familiar, it’s likely you’ve played a Call of Duty title in the last few years.

Levels in multiplayer are pulled directly from the singleplayer game, so the two levels I saw came up again later in the day.  The first level was a wrecked city with a large open area park in the center.   The second was a battle-torn and much larger urban metropolis complete with skyscrapers.   The levels had a bit more verticality, giving the jets a little bit of room to spread their wings, so-to-speak.  Since Breakaway is a harrier, his ability to hover while sniping will become invaluable as a support class.  Staged throughout the level there are shield upgrades, damage doublers, and various other timed upgrades that should turn the tide of battle nicely.

The second mode we played was more exciting than deathmatch – a variant of capture-and-hold where five control points had to be seized and held by one side for as long as possible to earn points.   Earning enough points ends the match, but holding those points isn’t as easy as it sounds.   Since the softer but more agile classes can’t handle direct combat as easily as the Warrior classes, sometimes holding a point is far more difficult than gaining it in the first place.   With a good spread of characters covering all of the classes, we had a very balanced and competitive game going.

There is a new mode in Dark of the Moon that has been overlaid onto every character – Stealth Force.   Stealth Force isn’t exactly what you might expect- it essentially gives a semi-transformed state to all vehicles, or a hybrid mode, if you will.  For those old school Robotech fans, you might recall this as “Guardian” mode.   This mode gives additional abilities such a four-wheel independent strafing and weapons while in a partial vehicle mode.   An example would be Bumblebee – fully transformed into a vehicle he has speed and agility and access to boosters, however in Stealth Force mode he has the aforementioned steering / strafing mechanism, but full machine guns, a larger cannon, and a secondary rocket launching system.

Autobots, transform and roll out!
The single player campaign is split into seven chapters with the first three being Autobot, the next three being Decepticon, and the final bouncing back to the Autobot team.  The6 first level I got to tackle (and mind you, these are very small snippets of levels and likely out of order) was as Mirage.   The stealthy Autobot has been damaged and he is left with only his ability to cloak and his arm blades.  He can charge this cloaking ability every few seconds, but the faster he moves the more visible he becomes.  Given that his blades are far more powerful when attacking from behind; his enemies should be approached carefully.  In this mission we see Mirage trying to reach Bumblebee inside of a nearby Mayan temple.   Unfortunately the jungle setting is completely choked with Decepticon forces, including a few heavy soldiers and three commanders.  The commanders carry keys to the temple, so clearing out their reinforcements and taking them out is paramount.  With the keys in my possession, I opened the temple and entered only to find Decepticon symbols on the walls – they have clearly been here longer than we thought.

The next level we got to play as Ironhide.  Ratchet has gotten himself into some trouble and we are tasked with his rescue.  This level is an abandoned factory complete with ramps, giant cement tubes, and plenty of other stunt-like objects.   Ironhide comes equipped with 4-wheel independent steering, a bit of strafing, a slower heavy cannon, a “Heavy Iron” special weapon, and an even more powerful charged “Grenade Blossom”. This makes Ironhide a formidable truck by any standards.   We didn’t get to see a great deal of this level beyond travelling around the factory ground and some of its interior, but it did give us a good look at Ironhide.  The Grenade Blossom is impressive, throwing clusters of Energon-seeking grenades at the feet of his enemies.

Bumblebee was up next on the Autobot side – his level being a jungle setting.  Like Ironhide, he has 4-wheel independent controls and can transform into his usual Camaro form.  His ability to whip around with his arms extended in a melee spin does incredible damage, and his homing missiles can take foes down at incredible range.   Bumblebee’s mission is taking out a set of orbital beacons in the burned out town that we encountered in multiplayer.  As he destroys them, more and more enemies arrive to try to stop him.   When he is well and truly overwhelmed, Optimus Prime and Sideswipe drop in to help him take out the remaining Decepticon threat.   A showdown in the center of town ensues, bringing fighters in both robot form as well as helicopter form.   The level ends as you take out the last remaining Decepticon foot soldier.

The final single player level is vague as it reveals just how Megatron was released onto the world once again.   Without a lot of spoiler, Megatron was being held by a humans and has somehow escaped his bonds deep in an underground base.  The Autobots have discovered his location and are attacking to try to prevent his rise to the surface.   As Megatron is heavily damaged, he finds himself in an arena-like location with only one weapon and very little backup.   Using a set of blast doors to escape, you are suddenly hit by a missile courtesy of Ironhide, dropping you further into the nuclear missile base.  Using the plutonium in the base, you are able to augment your abilities, allowing you to spawn hatchling robots from some nearby blue pods that have attached themselves to the columns.   As I cut through air vent fans to secure my escape, the folks at High Moon told me that was the end of our demo for the day.

“Coronation”, Starscream? This is bad comedy.
Without knowing the connecting pieces of the single player game, this piqued my curiosity – it only served to make me want to play more.   We’ve got a few weeks before the game’s release on June 14th; perhaps we’ll learn a little more in that time with both E3 and review material coming out.

Generally speaking, movie tie-in games fail to deliver a compelling game experience. With High Moon Studios driving the Transformers games, it looks like we have something to look forward to in the Dark of the Moon. 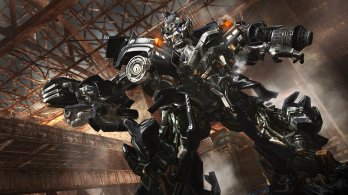 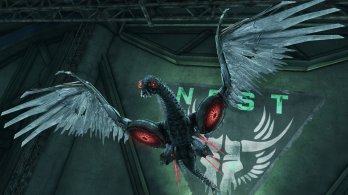 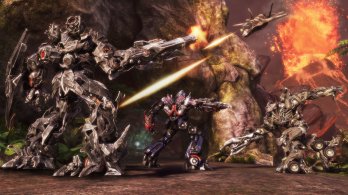 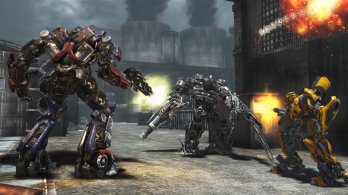 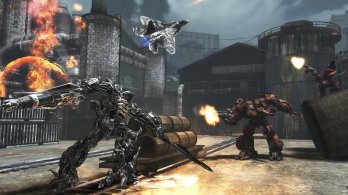 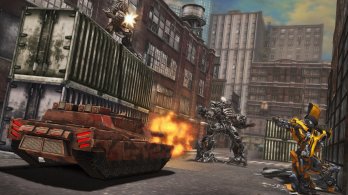 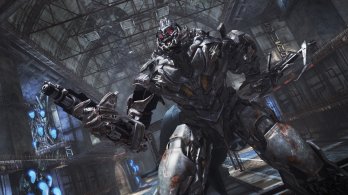 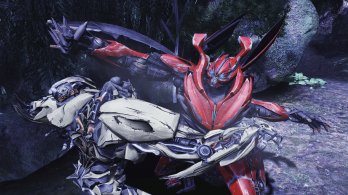 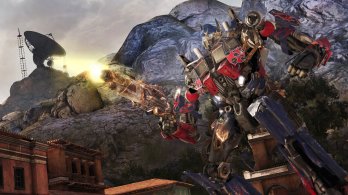 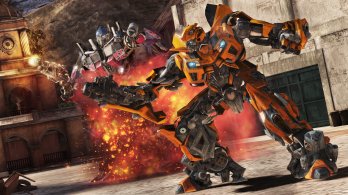 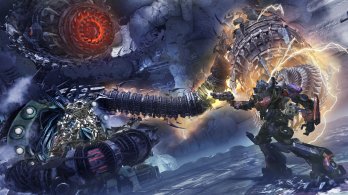 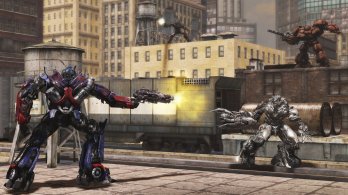