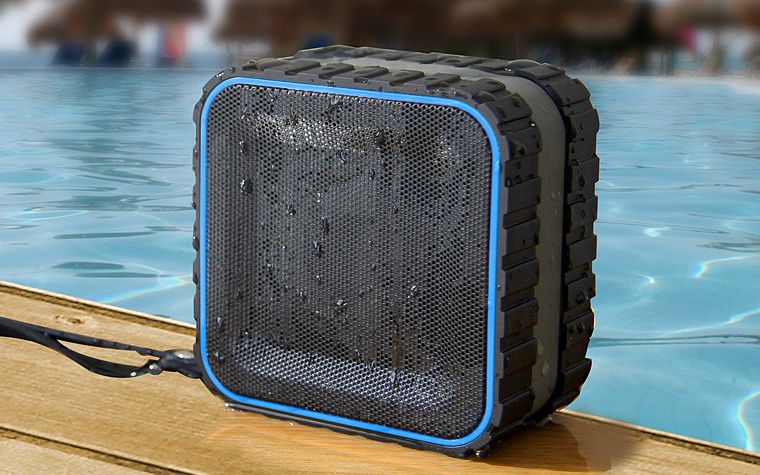 I try to be a careful, responsible guy when it comes to my precious electronic gadgets. It took exactly one unfortunate collision with the floor to wrap all of my iOS devices in enough rubber and latex to suggest I’ve got a subconscious bondage thing going on, and the prospect of listening to music on my iPhone or – God forbid – my iPad while I’m in the shower is pure fantasy. I’m not sure exactly how water-fragile iOS devices really are, but until a reanimated Steve Jobs shambles onto a stage and holds up an onyx rectangle that he swears to Cthulhu can take a direct hit from a supersoaker, I don’t plan on testing their limits. Paranoiacs like me are why there’s a market for something like the Bluetooth Splash Speaker, which offers itself up as a way to listen to music or even phone calls via a chunk of electrical wizardry that’s actually made with some water-contact in mind.

Let me admit up-front: I’m not an audiophile. I love music, but I’ve never developed that precise sense of hearing, much less concern, that’s required for arguments about various music compression formats to matter or even worry about speaker quality – which makes the Splash Speaker right up my alley, since it doesn’t aim itself at the -phile market. “High Quality 3W Sound” is about as far as the boasting gets on the side of the container. Right from the moment my gaze was set on the box, I knew what I was dealing with: this is a device that lets you listen to music and calls while you’re in the midst of activity where you or things around you are likely to get wet. Rain, poolside, in the shower… use your imagination for other possible scenarios, but those are the mainstays.

Packed in with the device itself is a USB charge cable, and a 3.5mm direct audio plug-in for when you’d like to make use of the speaker without the Bluetooth option. Specs boast a 5 hour playtime per charge and a wireless range of up to 33 feet – and my experience shows this to be pretty accurate. In fact I was able to get a signal straight through the wall, which I admit impressed me. Setting the system up was a breeze, requiring a single syncing action by holding down the appropriate button on the device, and voila – there I was listening to Tap Titans’ audio while I hammered at my iPad like a monkey in a grad student’s experiment. Mind you, this portion of the device experience took place while sitting at my computer, fresh from unplugging the charge cable. Easy setup, immediate performance and enough quality to please my tin ear impressed me straightaway – I like it when things just plain work, and this was one of those instances.

Before I go on, let me say another bit of praise in favor of the Splash Speaker: it feels solid. My large, eastern-european hand is just barely able to get a solid enough grip on it, and the device by no means feels small and fragile. In fact, considering the black treaded rubber coating on the edges, it actually looks like it can take a bit of a beating. I didn’t hurl this thing across the room at any point, but I almost want to do exactly that because I bet it’d just keep right on playing. The ‘splashproof’ aspect seems to primarily be in the form of the incredibly tiny pinholes that dot the plastic covering over the speaker itself. The shower experience was a success – I hung it off the nozzle (via the attached, rubber strap that I assume is for hanging it with, by the by), de-filthed myself, and listened to some chiptunes. A more daring man would have hit the thing with a hose and figured out just how much of a dousing it can take before going belly-up, but considering it’s merely splashproof, not submersion proof, I didn’t want to push my luck. It survives splashes, it plays well – good enough for my money.

Final verdict? The Bluetooth Splash Speaker does exactly what it promises, and gives you a way to bring audio into splash-risking situations without having to risk your precious (and often damn expensive) phone or iPad. The setup is simple, charging is a breeze, and the mix of quality and performance is more than adequate for all but the most elite of audio freaks. You can pick it up at Uncommon Goods if you’re interested, or check around online to do the usual bit of deal-hunting.

Victor Grunn has been a gamer since the days of single-button joysticks and the Atari 800XL. When not lamenting the loss of the Ultima series or setting people on fire in Team Fortress 2, he's an aspiring indie game developer and freelance writer.
Related Articles: Hardware
Share
Tweet
Share
Submit