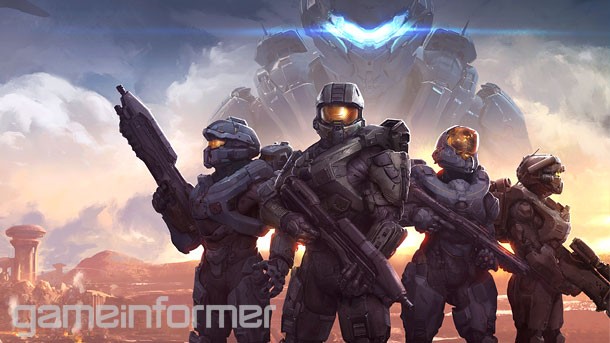 With E3 right around the corner, Gamestop-owned Game Informer has revealed the July cover for their publication, which will feature Halo 5: Guardians as their cover story.

Ahead of the July issue’s release, Game Informer gave us a peek at some campaign details, which they’ve gotten some extensive hands-on time with:

We went to 343 Industries to get the first hands-on with Master Chief’s campaign. As you can see from the cover imagery, the Chief is now accompanied by the legendary Blue Team in both single-player and four-player co-op. Linda, Fred, and Kelly were abducted when they were six years old alongside John to be turned into Spartan-II super soldiers. This tight-knit squad grew up together and battled through many adventures in the expanded fiction, but this will mark their first significant role in a core Halo game. With the loss of Cortana in Halo 4, Blue Team steps up to interact with Chief, appear in cutscenes, and accept commands from him in single-player. In co-op play, everyone takes on a specific member, each with a different loadout unique to their specialty.

What do you think of the new Halo 5: Guardians information? Let us know in the comments below! We’ll have more information on Halo’s next entry as it becomes available.