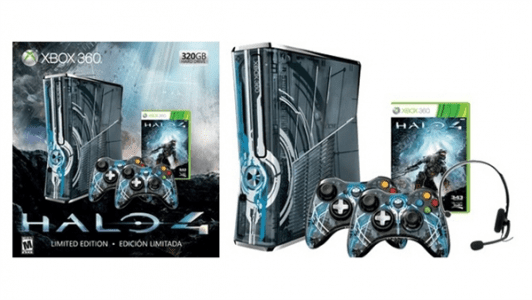 Those people who attended the San Diego Comic-Con got an eyefull courtesy of freshly-revealed Halo 4 Limited Edition Xbox 360 bundle.  As you can see above, it brings the sexy with a pair of controllers, a headset, and some fantastic artwork.  Here is what you get with your $399.99 investment:

The Xbox 360 Limited Edition “Halo 4” console bundle is available for pre-order today and will arrive in stores with the launch of “Halo 4” on Nov. 6, 2012. This must-have bundle contains an exclusive, custom-designed console and two exclusive controllers inspired by the game, a standard edition copy of “Halo 4,” a wired headset, a massive 320GB hard drive, built-in Wi-Fi, and Xbox LIVE tokens for exclusive “Halo 4” in-game and avatar marketplace downloadable content. The “ring of light” on the console, as well as the Xbox Guide button of the controller will showcase a glowing blue color to match the overall “Halo 4” color scheme.

The game is set to release day and date with the bundle – October 21, 2012.  If you already have an Xbox 360, you can also pick up these snazzy controllers as a separate deal.   Check out the press release below for the details.