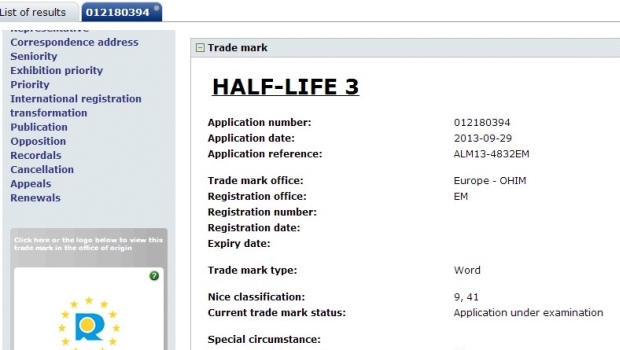 In an interesting development, Valve seems to have finally trademarked the name “Half-Life 3,” the application can be seen above. I must say, it’s a bit shocking that this is just now being trademarked but either way, it could mean something for the much anticipated third installment in the Half Life franchise. Is the game beginning to become a reality? Common sense would say yes, but who really knows?

Color me cynical but anything coming of this would be a surprise to myself. It seems rather clear after Valve’s trio of announcements last week that they’re focusing very strongly on hardware. That doesn’t stop the world from being interested and following the story closely, though. In the past, Valve head man Gabe Newell has said that elaborating on Half-Life 3’s development “would probably drive people more crazy.”

Though there’s very little to report on apart from the registered trademark, we will keep you updated if anything else develops.