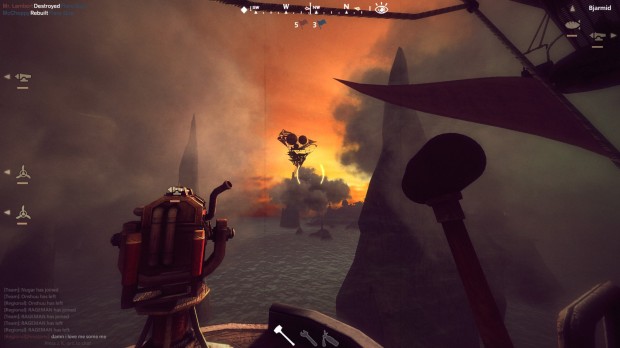 A while back co-writer Sean Lama and I had the chance to take a look at Guns of Icarus Online, a game in which you and 3 buddies crew a small steampunk airships.  It’s a concept I absolutely adored, but at the time there were some serious issues that kept it from getting a really good score.

Well, Muse Games, the creators of Guns of Icarus Online, haven’t been idle in the months since that review, and the latest patch adds an interesting new feature: a commendation system.

At match end, simply click on the thumbs up icon next to another player’s name to give your commendation to crewmates or fellow captains for good teamwork, communication, helpfulness, skill, or just as a way of saying “Pleasure serving with you.”  Or commend an enemy captain for a well-fought battle!

Your commendation is an honor that can only be given once to each player, and stands as your permanent stamp of approval. As you earn commendations from your fellows, you will be able to unlock exclusive prizes and medals as you rise in acclaim.

So you’re shooting up airships and blowing your enemies out of the skies, but there’s no reason not to be sporting about it!

Now, when I played GoIO, I found the community to be the one of the best I’ve ever played with.  Nearly everybody used the excellent in-game chat–no teamspeak required–and was incredibly friendly to a noob’s struggles in this quirky little game.  The commendation system seems a bit unusual in this context.  So of course I logged back in to see how the community behavior had changed.

Turns out it hasn’t.  Everybody is still incredibly friendly.  The commendation systems remains a mystery to me, my friends.  But it’s a nice touch to add to an intriguing game.  I’ll probably be revisiting this one soon to see if things have improved since the review went live a few months ago.