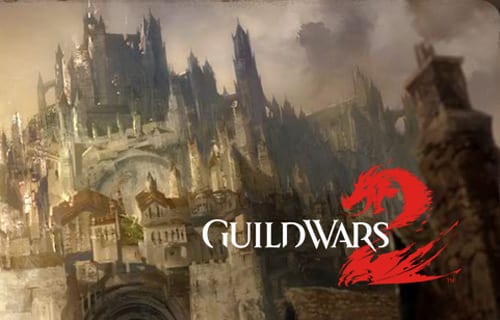 With all of the heat building up around the launch of Guild Wars 2, we have a collection of videos that go over the main pillars of Guild Wars 2 – specifically, Lore, Continuity, and Content.   The videos give you a good look at what I experienced when I got hands-on with the game.   We have a metric TON of gameplay videos of our own, as well as my own hands-on experience.  Let’s get a nibble from that:

Next to take the stage in our presentation was Lead Content Designer, Colin Johansen.  His focus was about describing in greater detail the three pillars behind the design of Guild Wars 2.  Going back to the first pillar, your personal story, there are far more permutations beyond the simple decisions.  For instance, if you play as the Charr, does your character come from the Iron, Ash, or Blood Legion?  If you are from the Blood Legion your character will inhabit the front line of battle, and you end up as the head of a warband.  You must overthrow this warband and work your way up through the legion as you work your way through your first 10 levels.  When you do overthrow that warband leader, you’ll have the option to let him live or to end his life, which has obvious later implications to your honor or that character possibly reappearing later.  If you select the Ash Legion you’ll act as a spy or a necromancer trying to infiltrate the Flame Legion.  Your objective then is to locate this group and eliminate their spy leader.   The Iron Legion are the engineers for the warband, building siege engines to be used on the front line.  As I mentioned earlier, every 10 levels you’ll be hit with another set of questions such as whether your father was a sorcerer, an honorable warrior, a coward, or other options.  You may even pick things like who your best friend was, giving you a chance to build them up and eventually determine their fate as well.  Each race has their own unique storylines similar to these examples, and Colin promised that by the time we hit level 80 we’ll have worked through thousands of possible permutations.  In fact, if you are inclined you can click on the Hero Journal and read through those permutations in a storybook format called the Hero Journal.  Who your character was, is, and is striving to become is all spelled out here – you are no longer a nameless and faceless warrior.

You can check out the videos on the official site, as well as my video preview on PVP, and my hands-on video take on a Level 30 dungeon.  The game is hitting shelves on August 28th, and I personally cannot wait!