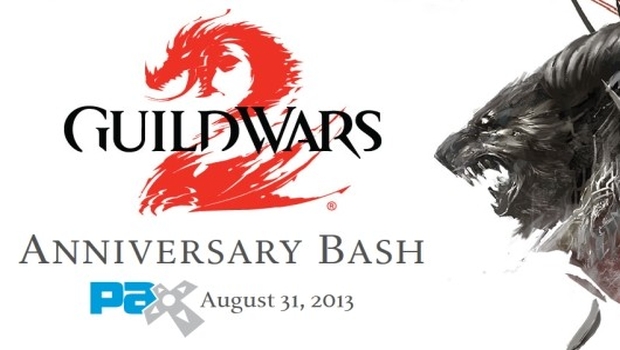 ArenaNet is getting ready to celebrate their first full year since launch with a huge bash, (You might recall that we dug it, quite a bit) and there is plenty to celebrate, given the announcement that Guild Wars 2 is the fastest selling MMO in history!  What will the Seattle-based MMO giant do for their party on the 31st of this month?   Well, given that it coincides with PAX Prime, you can bet there will be some crossover and fan meet-and-greet!   Let’s get into the details:

“The game sold so far beyond our expectations,” wrote ArenaNet president Mike O’Brien in a blog post released today, marking the anniversary. “In this first year we’ve ramped up to make Guild Wars 2 the best-supported, most-updated online world in the industry.” To read the full blog and view an infographic created to commemorate the milestone, visit https://www.guildwars2.com/en/news/guild-wars-2-the-first-year/.

The Guild Wars 2 Anniversary Bash will take place in the Madison Ballroom in downtown Seattle’s Renaissance Hotel on Aug. 31 from 1-11PM PST. The event will begin with a welcome address from studio president O’Brien, followed by a sneak peek at exclusive new content and an informative panel discussion with Guild Wars 2 developers about the game’s Living World, which is delivering players exciting new content at a pace unprecedented by Western standards.

Two teams of competitive players will face off in the inaugural PvP Invitational Tournament.  The two winning teams from the North American and European regional qualifying tournaments will face off in a best three out of five player vs. player (PvP) match with $10,000 in prize money on the line. It’s competitive PvP at its most intense.

Starting at 8PM, ArenaNet staff and players will mix and mingle in an anniversary party full of music and prizes.

If you are heading out to PAX, you’ll want to hit the schedule below to get a chance to meet the team.   Having met all of them in person myself on my trip to the studio, let me tell you that they are pretty awesome to hang out with.  Don’t miss this awesome chance.