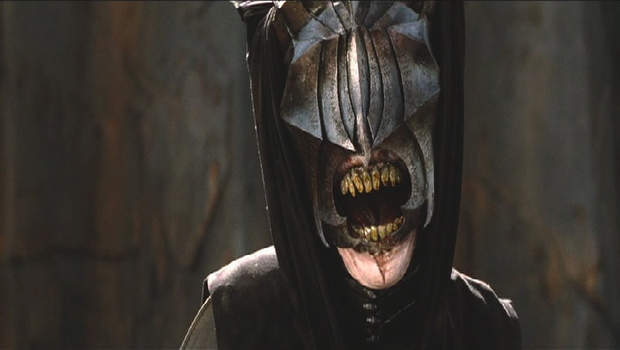 The Lord of the Rings: Guardians of Middle-earth is still going strong, and today we’ve got a video showing off a new character – the Mouth of Sauron.  First, check out our review to see that the game is indeed a solid title, then pop below this post for a quick peek at this new unit in action.   Here’s a nibble about the Mouth of Sauron:

As the only person who directly communicates with the Dark Lord, Mouth of Sauron provides orders to the armies of Gorgoroth, the northwestern region of Mordor.  He briefly encounterd Aragorn before the Battle of the Black Gate, dismissing him as the new King of Gondor and Arnor.

In Guardians of Middle-earth, gamers team up as the most powerful heroes from the greatest fantasy epic of all time, bringing up to 10 players together in a competitive multiplayer online battle arena (MOBA) game.  Featuring select characters from the film, The Hobbit: An Unexpected Journey, the game allows players to develop and master more than 20 iconic characters. Play as Gandalf, Gollum, Legolas, Sauron and more, forming memorable and unlikely alliances with and against friends. Gamers will have the ability to connect with other players via an in-game voice communication system, as well as access to a comprehensive online stat and leader board system where they can track friends’ victories and defeats, and more. Now available at select retail stores and via download for Xbox LIVE Arcade for Xbox 360 and PlayStation Network

The game is on XBLA and PSN, and this DLC is available ASAP, AKA NOW!  Enjoy the trailer.

The Mouth of Sauron - Guardians of Middle-earth [Official Trailer]