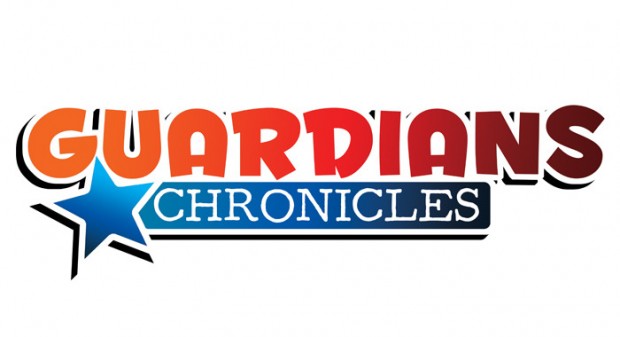 While there are plenty of fantasy board games out there, the number of superhero-based ones is fairly limited.  While Legendary and the DC Deck Building Game have recently come out, there haven’t been many besides Sentinels of the Multiverse and the long out of print Marvel Heroes.  That’s why I’m happy to report that Iello has posted a new Kickstarter for their game Guardians Chronicles, a semi-cooperative game.  One person plays as the villian while the other characters attempt to thwart his plans.

At the beginning of the game, the player playing Skarov creates his base by arranging 9 double-sided game board tiles into a 3×3 grid, with his control room being in the center. Each player takes his or her character sheet, miniature and 7-10 action cards. These characters enter the grid on one of the side tiles and need to move around the square – facing minions and traps along the way – in order to achieve whatever objectives set for the current game, such as thwarting a nuclear missile attack.

Each turn, each hero player plays 1 or 2 action cards; each card can be played either as a special power or as modifiers to the hero’s basic features – movement, attack, defense and mental. Each hero player has also four actions in a round, that can be taken in any order; the available actions are to move across the base, to attack an enemy, or to use a special power on a played action card or on the hero’s character sheet. The villain player then receives a number of action points depending on the heroes’ actions, and uses these to activate Professor Skarov, his minions, or his robots, with these figures also performing move, attack, or special power actions.

As the players complete (or fail to complete) objectives, the newspapers report on who did what, and the sum of those reports determine who comes out on top. Depending on the scenario, the players must achieve a certain number of objectives to attain victory, while the evil Pr. Skarov attempts to thwart their efforts.

It looks like the game has a good number of miniatures, and for those who want something a little different than Descent or Mansions of Madness this could be a nice substitute.  From what I have seen of the rules, the system lets you also change your stats and abilities throughout the game.  If you want more information, be sure to check out their Kickstarter page.  They have some great looking stretch goals as well, and they are already 75% funded after a single day.