As Grim Dawn sails into the final three days of its Kickstarter funding drive, the team behind the game is revealing more details about their core design and how coming in over $100,000 above their original goal will polish and improve the final product.

Action RPG worlds traditionally fall into one of two categories: the randomly laid out tile sets found in games like Diablo and Torchlight, or the hand-crafted pathways from Titan Quest.  It’s the classic struggle between the lure of procedural unpredictability and the authorial power of deliberate design, but Crate Entertainment has built Grim Dawn around a hybrid that combines the strengths of both.  While every level is being sculpted by hand, ensuring the regions have a well-defined sense of place and purpose, but with randomized elements that will present different challenges on subsequent adventures.

So, essentially, this map shows all the routes you can take as you exit town and wind your way through the first area, currently named “Lower Crossing”. There are three different locations you can progress into and there are multiple different paths you can take to each. Some of the paths will be cut off by dynamic obstacles in different places during different play-throughs. However, there is always a way to circumnavigate the obstacles and get to wherever you want to go via a different route.

The full map can be viewed in the developer’s original forum post here, or in our screenshot gallery below.  It’s a pre-alpha aerial shot of a plan that’s been at the core of Grim Dawn’s design from the start, but the developer has outlined how additional funding thresholds will enable the team to expand the game with even more content.

$400k – new environment set that you’ll get to decide on.  We’ll create a thread on the Grim Dawn forums to discuss ideas with fans, then select the best ideas and create a poll for you to vote the one you want most.

Finally, buoyed by their warm reception on Kickstarter, Crate Entertainment has updated their reward packages by including copies of the game’s first expansion pack for people who pledge $48 or more.  Full details can be found in Monday’s update post right here.

Grim Dawn’s Kickstarter funding drive will draw to a close at midnight, Eastern time, this Friday. 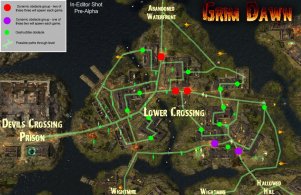 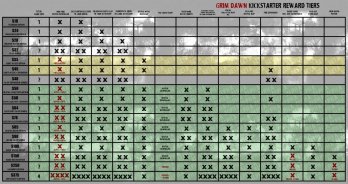