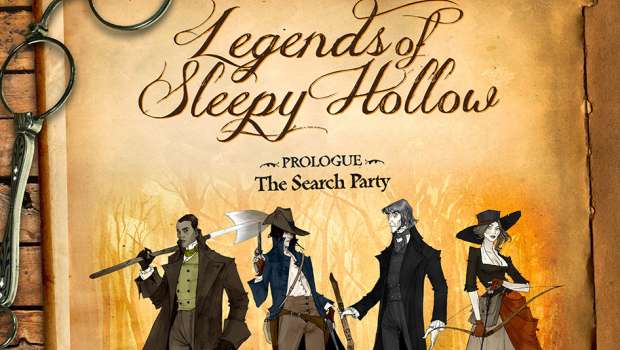 Matt Riddle and Ben Pinchback have designed a wide variety of games, from the filler Eggs and Empires to the recently-released big box game Wasteland Express.  Soon Greater than Games will be bringing one of their designs to Kickstarter, Legends of Sleepy Hollow.

Legends of Sleepy Hollow is Greater Than Games’ newest game from the creative minds of Ben Pinchback and Matt Riddle, creators of the best-selling Fleet, Eggs & Empires, and Wasteland Express Delivery Service.

Unfold the tale of the mysterious disappearance of Ichabod Crane through the eyes of four Tarrytown residents who have strange ties to the supernatural in an ever-darkening Sleepy Hollow.

In Legends of Sleepy Hollow players take on the roles of four residents – undertaker Jeremiah Pincke, minister Elijah Kappel, Revolutionary War veteran Matthias Geroux, and tanner Emily Van Winkle – in a cooperative, miniatures-based, campaign game full of secrets and twists. During the game, players will use an action pool to move about, investigate, interact with their environment, or unleash powerful attacks and abilities that are unique to each character. Once selected, however, these abilities will be unavailable until that character’s action pool has emptied – a process that becomes more complex as that character gains fear.

Players will have to work closely together to overcome their fear, unravel the mysteries of the glen, and become true Legends of Sleepy Hollow.

Greater Than Games, LLC will kick off the Legends of Sleepy Hollow Crowdfunding campaign, October 17, 2017, on Kickstarter. A retail pledge option will be available.

Greater Than Games is privileged to be working with the following artists on this project.

Abigail’s work has been shown extensively throughout America from NYC to Los Angeles, as well as galleries in London, Paris, and Madrid. Her illustrations have been featured in various publications including Spectrum Fantastic Art, Art Fundamentals, The Graphic Canon of Children’s Literature, and Digital Artist among many other publishing houses such as IDW Publishing, Titan Comics, Pelican Books, and 3DTotal. Her fully-illustrated version of H.P. Lovecraft’s “The Cats of Ulthar” was released in November of 2016.

Colin Chan is a professional artist who specializes in concept art and illustration. He graduated from the Kendall College of Art and Design in 2012, with a degree in digital media. Colin has worked for a multitude of companies as a freelance artist, covering a range of needs for illustration, marketing and concept art. Along with his work in freelance, he has also broken into the slot machine industry as a 2D animation artist.

Francesco is a passionate digital sculptor and 3D artist, based in London, primarily focused on digital sculpting, 3D modeling, and texturing. He graduated from Bologna University and completed a Master of Arts degree in Computer Animation at Kingston University. While completing his masters he worked in 3D printing production, indie games, and wargame miniatures.

I’m curious to see what these two can do with a miniatures game.  However, I can’t think of any other games using this theme, so I’m excited to see something unique coming to the tabletop.  Look for this in the middle of October.