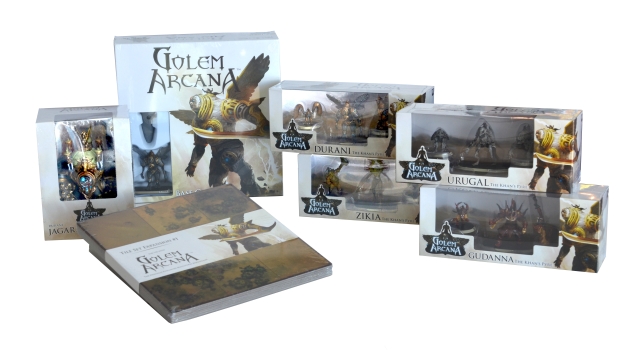 While we have seen board games come with electronic devices, we are starting to see some integration with board games and tablets.  Golem Arcana looks unique in that it uses a special stylus to communicate with the tablet.  Harebrained Schemes has been working on this for a while, and it will finally be released on August 13, right in time for GenCon.

Harebrained Schemes today announced that its innovative Kickstarter-funded game, Golem Arcana, will be available at retail stores nationwide on August 13, 2014. Golem Arcana is a digitally-enhanced miniatures board game that combines the power of a smartphone or tablet with strategic tabletop gameplay to deliver a completely engaging and unprecedented experience.

Golem Arcana merges the social fun and tactical depth of a rich tabletop experience with the ever-evolving dynamics of digital gaming. Players use a Bluetooth-powered stylus and a free mobile app on an Android or iOS tablet or smartphone to interact with the figures, game board and cards. Players assemble their armies of pre-painted miniatures and digital characters and launch attacks using the stylus and the app. Just tap a game piece or the mobile device with the stylus to instantly get information and choose the best course of action.

“Golem Arcana allows us to share our love for tabletop miniatures games with a much broader audience,” said Jordan Weisman, founder of Harebrained Schemes and executive producer of Golem Arcana. “By embracing the interface design of digital gaming and marrying it with the tactile and social experience of tabletop gaming, we’ve made Golem Arcana accessible to all types of players — whether you’ve been in tabletop tournaments for years or have never played this type of game before. Players can focus on making good strategic decisions and having fun with their friends while the app handles the rest.”

An important component to the game, the intuitive mobile app doesn’t just make every game quick and exciting, it also instructs players, performs record-keeping, maintains gameplay history and details, and alerts players to in-store tournaments and Organized Play events in their area. The automatic record-keeping system allows players to accurately track their victories and be digitally rewarded for participating and winning, as every game registered in the system affects the development of future expansions and scenarios. Updates and expansions will be regularly available and accessible for download through the app.

“There is an unlimited number of ways to play Golem Arcana,” added Weisman. “The living world environment extends the life of the game with new storylines, miniatures and digital characters, and players can try different army combinations each time they play.”

The figures look great, and the integration with the tablets sets it apart.  You can find out more information at their web site.