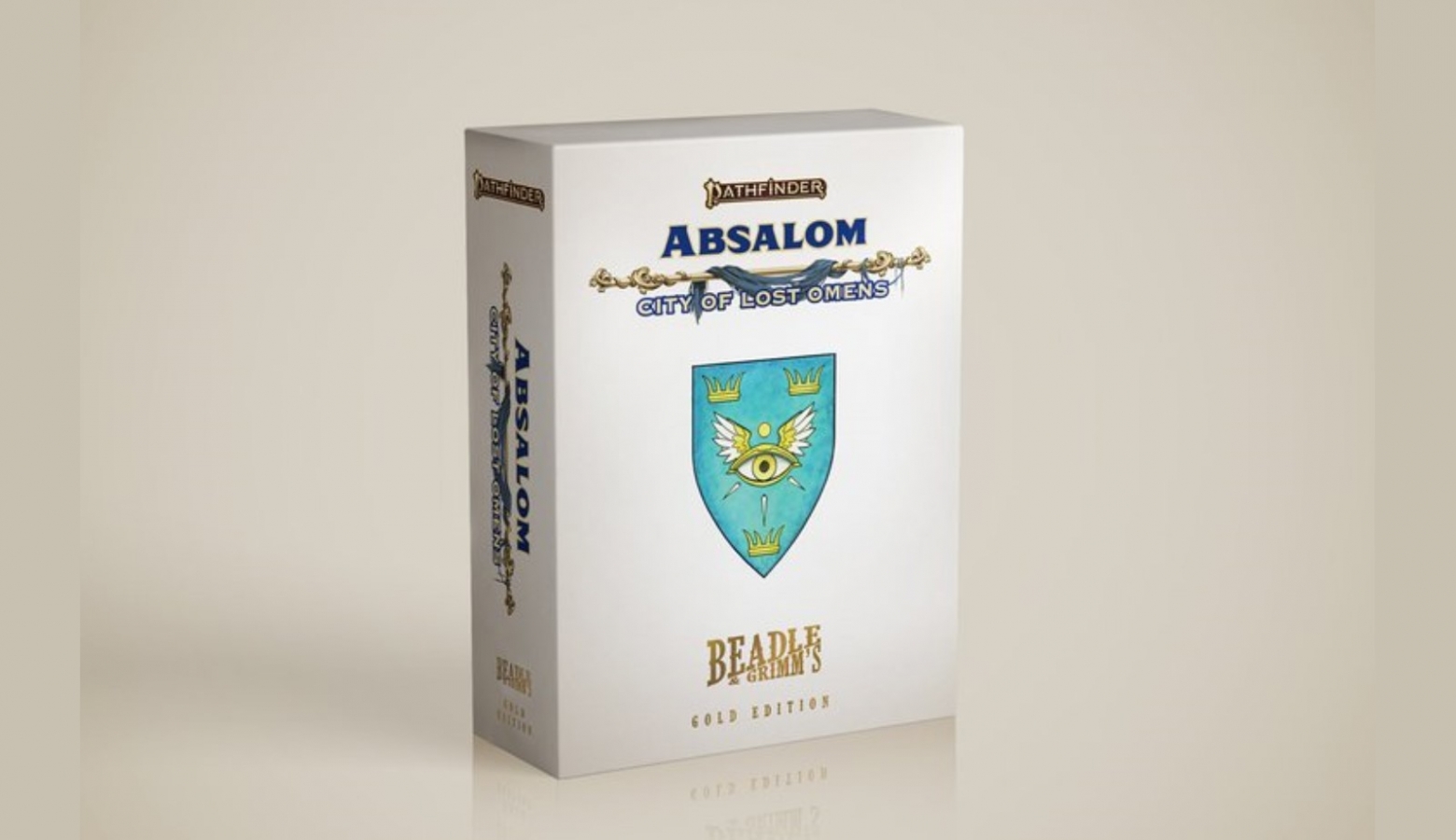 A Gold Edition of Pathfinder’s Absalom, City of Lost Omens is set to release in February 2022, with pre-orders beginning on Black Friday. This is Pathfinder’s first premium edition box set release and comes with maps, jewelry, coins, coasters, handouts, NPC and Location cards, and more. Read below for full details:

(LOS ANGELES, CA – November 22, 2021) – Beadle and Grimm’s, a champion of the tabletop roleplaying game experience, announced today the unveiling of a Gold Edition of Pathfinder’s comprehensive city guide Absalom, City of Lost Omens to be released worldwide in early 2022.  The Gold Edition can be ordered starting on November 26th at www.beadleandgrimms.com/pathfinder/absalom.

Officially licensed by Paizo, this Beadle & Grimm’s boxed set will be filled with elements a Game Master (GM) needs to immerse their players into Pathfinder’s most famous city. Whether they’re playing Pathfinder 2e, Pathfinder 1, or even a 5e rules-based campaign, this set will help a GM establish an incredibly detailed urban setting.

AN ABUNDANCE OF MAPS

When the player is handed an Absalom broadsheet, or an invitation to adventure, the GM will actually hand these beautifully designed pieces to the player instead of simply reading them.

Absalom comes with its own unique factions and organizations and the Gold Edition will include three pieces of faction-related jewelry, a set of coins of the realm, including a collectible gold coin that can only be found in the Gold Edition, and a set of four in-world coasters sure to delight the players and help keep the GM’s table stainless! 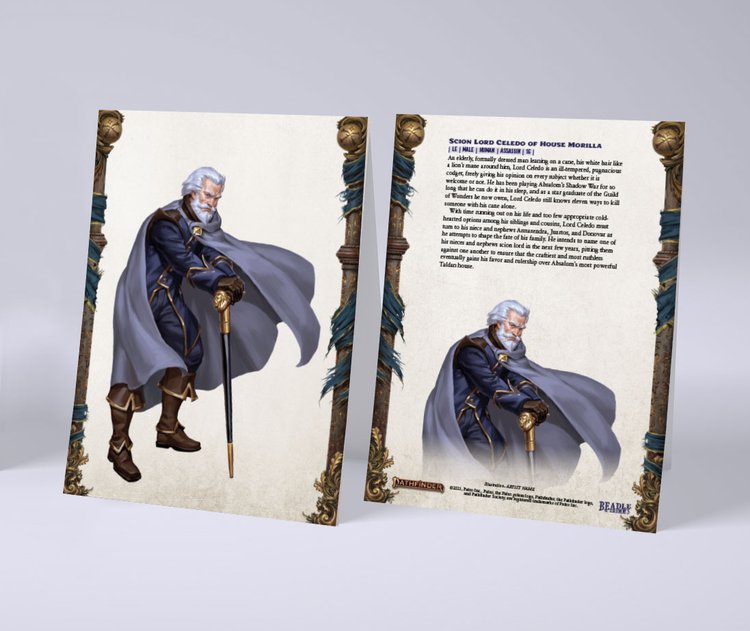 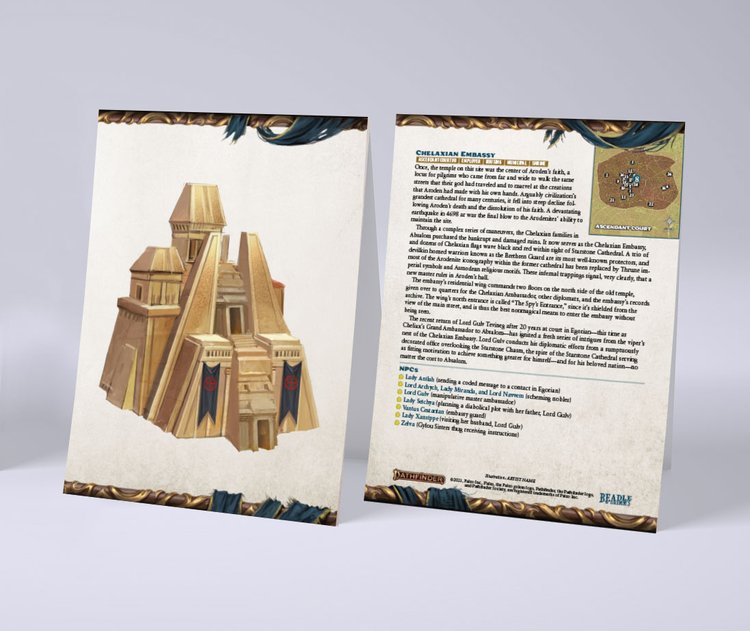 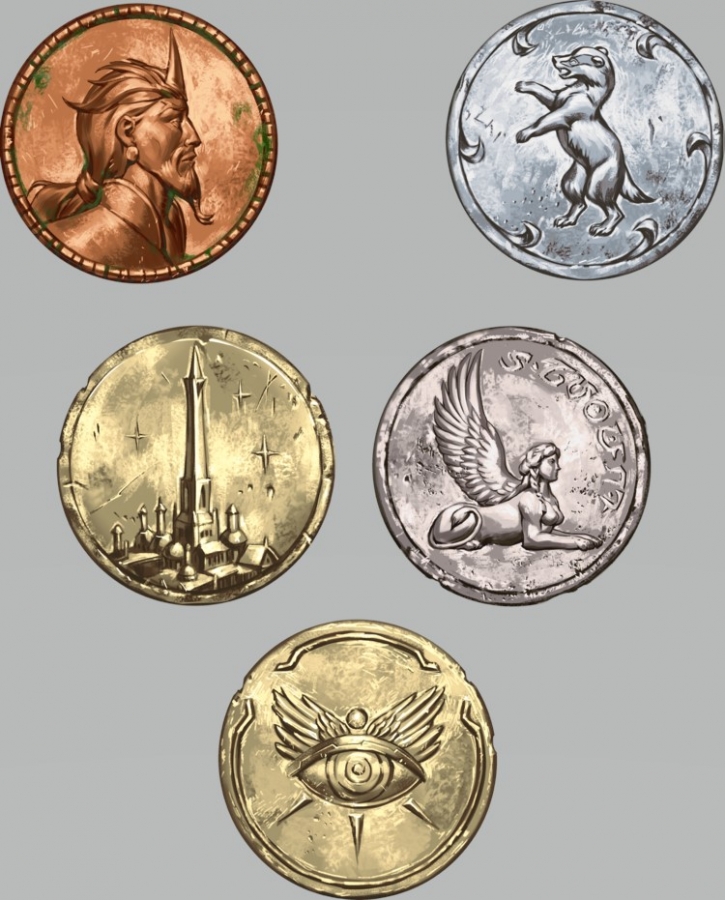 Designed to ﬁt over the GM’s screen, these cards will feature artwork of important Absalom non-player characters and key Absalom locations on the player side and important role-playing information or key location information on the GM’s side.

The exterior features B&G original art, while the interior will give the GM the quick-reference tables and city-specific information needed to smoothly run their game.

These short adventures, created exclusively by Beadle & Grimm’s for this edition, take advantage of areas, maps and important players in Absalom. They can be dropped in by the GM, or act as launching points for longer adventures of the GM’s design.

Paizo’s complete published book is included in smaller booklets that allow the GM to organize the parts of the city needed for a particular session, whether it be an individual district, the comprehensive list of NPCs, or the introduction to the city.

Purchasers of the Gold Edition will be emailed a code to unlock Absalom, City of Lost Omens online on Demiplane!

“The folks at Paizo have created a city so rich, so immersive, you could run an entire campaign and never leave the city walls and yet feel like you’ve seen a world’s worth. It has been immensely satisfying working on this project with such a collaborative team, and I expect GMs to get years of use out of this setting,” said Jon Ciccolini, Beadle & Grimm’s lead on Absalom, City of Lost Omens Gold Edition.

“Our Absalom, City of Lost Omens hardcover is a lore-packed guide presenting a fascinating locale suitable for years of Pathfinder adventures. With a huge poster map of the city, more than 250 locations, and 400 NPCs to set the scene in unprecedented detail, it beckons characters to walk upon streets paved with centuries of history. Now, in Beadle and Grimm’s hands, the City at the Center of the World, will vividly come to life at the gaming table for unparalleled cosmopolitan adventures,” said Erik Mona, Paizo Publisher and CCO. Mona was also an author, Development Lead and Editing Lead on Pathfinder Lost Omens Absalom, City of Lost Omens.