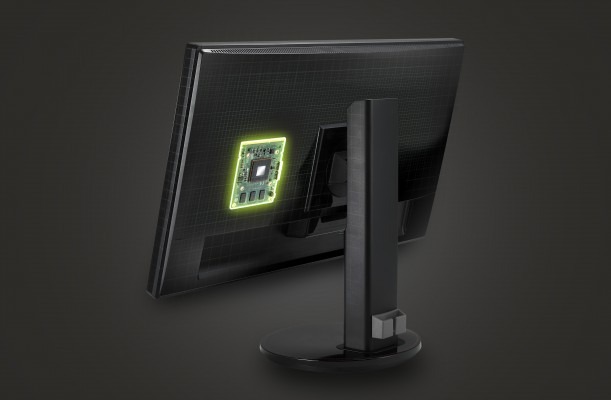 VSync! Every PC gamer has seen this setting before in their video options. Not nearly as many knew what it does. VSync is supposed to help reduce screen tearing by syncing up the frames being sent from the video card to the monitor to prevent the visual stutter that plagues all of us. The best part is that it absolutely does not work! Yaaaay! When I saw the recent announcement out of Montreal I knew exactly where Nvidia was looking to do with G-Sync. To quote the official page, they want game play to be smoother, every time. Before we get into G-Sync let’s boil down VSync to something simple (though you can feel free to read into all the details at this Wikipedia page).

When you enable VSync the game you are playing locks things down and waits for the whole image to render before sending the next one. This has an obvious impact on your framerate and only works at either 30fps or 60fps. Without it, when your GPU continues to send frames whether your monitor is ready to display them or not, sometimes getting the first or last frame slightly late, giving you a stutter in animation. Put simply, your GPU, CPU, and monitor need communication and synchronization; enter G-Sync.

Nvidia wants to end screen tearing forever. By partnering with (currently) Asus, Benq, and Viewsonic, Nvidia will be adding a module that will allow the video card to synchronize with the output of the GPU (anything above the GeForce 650 line) to deliver tear-free and smooth on-screen results. The best part is that you’ll actually be able to do the same thing if you own monitors from those three manufacturers.

Nvidia is developing a DIY kit within the next few months that will allow users to pop open their monitor, replace the physical PCB, and put it back together all with no soldering. The one on display that had been modded this way was a 24″ VG248QE monitor from Asus.

I’ve been trying to explain what screen tearing was to my wife for a long while, but watching a modified and non-modified monitor show the effects of G-Sync in action, it was pretty easy. To see it so quickly eradicated and with very little added cost was encouraging. Reducing visual lag has interesting implications on high-twitch games, so I imagine the eSports folks are watching G-Sync very closely. We’ll keep you posted on G-Sync as we find out more about this amazing piece of technology.  In the mean time, check out the official page for G-Sync to see what the likes of John Carmack, Tim Sweeney, Johan Andersson, have to say on the subject.