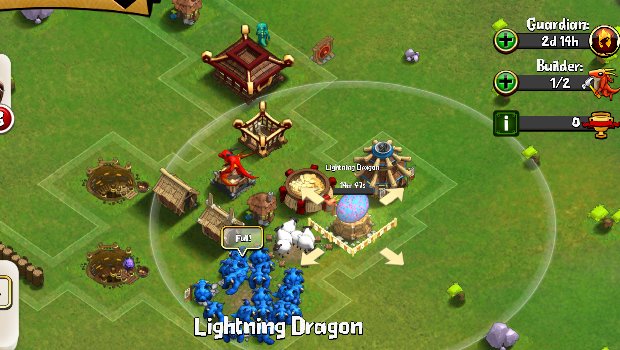 Battle Dragons has been released on the App Store, and I’ve been spending a little time with it. Presenting you with the task of building and commanding an army of dragons, Battle Dragons is a mixture of light city building and upgrading, and a variety of ‘fire and forget’ realtime strategy the likes of which I’ve never really seen outside of the iOS platform. At this point I think I’ve incinerated enough houses (and enemy dragons – they’re surprisingly flammable) to give you all a nice, quick rundown of what to expect from this game before you go picking it up in the App store. Not that it’s high priced by any measure, being yet another App store entrant under the free-to-play model.

Spacetime Studios’ Battle Dragons has two real sides to it. First, there’s building up your home base with resource-generating, unit-producing and upgrade-enabling structures, and protecting it by placing walls and defensive structures at key locations. This occupies a kind of halfway point between a traditional strategy game, and something closer to Farmville – you’re developing an infrastructure through which you’ll be able to pay for additional upgrades to your town, leading to quicker resource generation, larger and more powerful armies, larger storage capacities for the two main currencies of Battle Dragons (gold and sheep), and more. Another Farmville aspect to the game is the pace at which resources accrue and (after the initial rapid development) buildings are built up – they’re rather slow. In fact, they can take hours, even days, to complete at certain points, with the option always looming to spend the precious ‘pearls’ currency (most easily acquired by spending real money, of course) in order to instantaneously complete a building’s construction, or acquire resources more rapidly. What sets Battle Dragons apart from similar games are the aforementioned defensive structures: you can build walls and defenses, which are important, since other players can and will invade you to try and burn down your whole encampment, and run off with a big portion of your money and sheep in the process.[singlepic id=15620 w=320 h=240 float=right]

Which brings us to the second side of Battle Dragons: the combat. Like other games of its type, there is no head to head play in this game. Instead, you build up your army of dragons (10 different ones eventually unlocked for use, so far), deploying them either against enemies in the single-player campaign or real-life opponents’ cities on the PVP side of things. You can select which type of battle dragons you wish to deploy, then tap on the perimeter of your enemy’s defenses to land them on the battlefield. Once so deployed, your control over your forces is gone – the computer AI will take over from there, with some dragons preferring to type certain structures over others. It’s a very simplified but surprisingly deep and rewarding style of tactical combat, since you can choose exactly what sort of dragons (each with different abilities, target-priorities, and stats) to deploy, and where and when to deploy them. There’s a timer on any given conflict you engage in, however, which means you have to raze your opponent’s city as rapidly yet as efficiently as possible to maximize gains. Whatever units you deploy, you lose – even if they don’t die to enemy defenses, they’re removed from your ‘inventory’ the moment you decide to place them on the field. This leads to trying to be frugal with your armies, at least if you don’t want to unnecessarily max out your downtime between each combat attempt. At any time you can also choose to cut your losses and simply surrender, if you happen to be facing far too well-defended of an encampment.[singlepic id=15622 w=320 h=240 float=left]

There’s a variety of buildings to create, upgrades to acquire, and units to add to your armies – and that, along with a truly lengthy singleplayer campaign, will keep most players busy for quite a while, assuming they can put up with the sizable wait times of the later structure upgrades. There’s also support for clan-based play in the game, so you can gather up with a group of friends (or enemies) and loosely collaborate to try and form the biggest, baddest, most destructive dragon force around. Despite all the talk of dragons, dragons, dragons, don’t expect these to be totally fierce, Smaug-looking creatures – the graphical presentation is a bit more soft-edged than that, closer to what you’d get if you’d (don’t try to imagine how this would happen) cross Smaug with a smurf. This may be a little too cute for some players, but others will welcome a less serious look to their dealers of doom. Aside from the PVP – which is, in this kind of game, essentially unavoidable – there are achievements to chase after, a singleplayer campaign to attack, and if you’re the type to enjoy it, a variety of purely-for-show unlockable structures you can acquire to make your dragon enclave all the prettier.

As stated at the start, you can pick this one up in the app store right now. It’s free to play and worth a look if you’ve never had the experience of playing a game like this before, or aren’t already deeply invested in one of its spiritual predecessors.