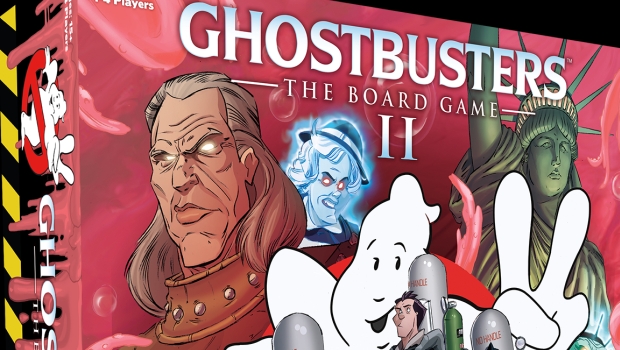 Cryptozoic Entertainment (cryptozoic.com), leading creator of board games, trading cards and collectibles, and Sony Pictures Consumer Products today announced the successful conclusion of the Kickstarter campaign for Ghostbusters™: The Board Game II. The stand-alone expansion game has been funded by 4,385 people pledging over $767,000 in order to bring the cooperative ghost-busting tabletop game to market. The Pledge Manager, where backers can manage their pledges and upgrade to additional add-ons, will be available on Kickstarter next week. This officially licensed Ghostbusters game will begin shipping to backers across North America, Australia, New Zealand, UK and EU in May 2017.

Ghostbusters: The Board Game II’s successful crowdfunding campaign received copious support from fans, who rallied together to unlock a variety of additional stretch goals, including:

●  The Extreme Ghostbusters Team, from the cartoons

The base game features 56 miniatures including both Courtroom and Slime Blower variations of the original Ghostbusters team (Peter Venkman, Egon Spengler, Winston Zeddemore and Ray Stantz). Players will also get The Scoleri Brothers and Vigo the Carpathian figures, plus 12 double-sided map tiles, the Ecto-1 ambulance, equipment cards, a PKE Meter and Ecto Tank, as well as custom dice and tokens which can be used for advanced gameplay variants. Expansions starring Louis Tully and Slimer as playable characters are also available, as well as an add-on starring The Real Ghostbusters and The Peoplebusters from the hit 1980’s cartoon. For global ghost bustin’, the game will be available in English, French, German, Italian and Spanish.

Ghostbusters: The Board Game II features an original story by IDW Comics’ Ghostbusters writer Erik Burnham in which Vigo and his minions return to the city, causing rioting and earthquakes to break out all over The Big Apple. Comic book artist Dan Schoening also returns with his signature Ghostbusters style. Ghostbusters: The Board Game II’s cooperative gameplay and modular design allow for highly customizable scenarios and nearly endless re-playability. This stand-alone expansion lets players hop in the Ecto-1A for a quick half hour session, or strap on their Proton Packs for a full-fledged ghostbusting campaign, making it the perfect game for board game veterans and beginners alike.

Be sure to view the official Kickstarter video, which stars Winston Zeddemore himself, Ernie Hudson! Hudson revives his iconic role from the first two Ghostbusters movies in a five-minute video where he straps on his proton pack to lead a group of Ghostbusters as they take on a paranormal invasion.

Looks like a great time for those those who want to bust some ghosts with the original cast and crew.  The less said about the new Ghostbusters movie trailer, the better.