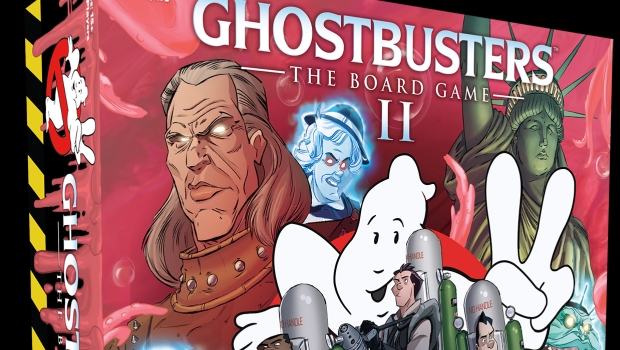 A new set of Ghostbusters hits the silver screen this summer, but some of us prefer the OG Ghostbusters.  While they aren’t going to be showing up for any screen time, they have been making their mark in a set of IDW Comics.  Last year Cryptozoic had a successful Kickstarter board game campaign, and they aim to match that success with a sequel.

Cryptozoic Entertainment (cryptozoic.com), leading creator of board games, trading cards, and collectibles, and Sony Pictures Consumer Products are proud to announce today’s launch of the Kickstarter campaign for Ghostbusters: The Board Game II.

This new campaign, on Kickstarter today, is crafted with fans in mind and includes the following contents in the base game: 54 Miniatures including 4 Courtroom Ghostbusters, 4 Slime Blower Ghostbusters, The Scoleri Brothers and Vigo the Carpathian plus 12 double-sided map tiles, custom dice and tokens, some of which can be used for advanced gameplay variants. Two expansions starring Louis Tully and Slimer as playable characters are also available for backers starting today.

Ghostbusters: The Board Game II features an original story by IDW Comics’ Ghostbusters writer Erik Burnham in which Vigo and his minions return to the city, causing rioting and earthquakes to break out all over The Big Apple! Comic book artist Dan Schoening also returns with his signature Ghostbusters style. Ghostbusters: The Board Game II’s cooperative gameplay and modular design allow for highly customizable scenarios and nearly endless re-playability. This stand-alone expansion lets players hop in the Ecto-1a for a quick half hour session, or strap on their Proton Packs for a full-fledged ghostbusting campaign, making it the perfect game for board game veterans and beginners alike.

Looking to bust some ghosts?  Head to the Kickstarter page to find out more.