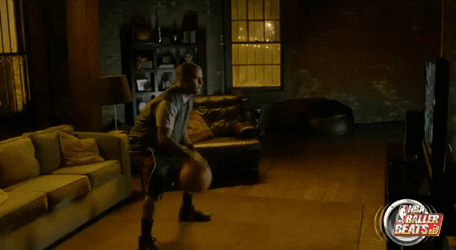 Playing a basketball video game might let you imagine you’re the next Michael Jordan, but at the end of the day you’re still just sitting on your couch pressing buttons. NBA Baller Beats, a Kinect exclusive set to be released this fall, hopes to change that. Players will have to get up off the couch and play, while the Kinect tracks their movement along with the movement of, get this– a real basketball. Developed by HB Studios, the game also boasts a fun soundtrack featuring a variety of genres over the decades, including rock, hip-hop, and old school classics. Check out the trailer after the break for a taste of the action.

“NBA Baller Beats introduces an unprecedented way to experience basketball through a video game like never before,” said Jesse Sutton, Chief Executive Officer of Majesco Entertainment.  “Our innovative play mechanic combined with Kinect technology puts the ball in players’ hands, tracking both full-body gameplay and ball movement, so players are going to have to get up and actually play basketball to get in the game.  Ballers and fans alike will love this game.”

NBA Baller Beats will allow you to test your skills in the main single player mode, while unlocking songs, difficulty levels, and in-game collectibles like posters and trading cards. Not sure your skills are ready for the court yet? There’s also the Move School mode to help you practice and master different skills step by step (although I’m not sure you’ll ever top the guy in the trailer below). When you think you’re ready, you can take your moves online to compete against others in 8-person multiplayer. It remains to be seen how well the execution of playing basketball on the Kinect will turn out or if in-game skills will transfer to a real court, but even a PS3 fangirl like me has to admit that the idea is pretty cool.