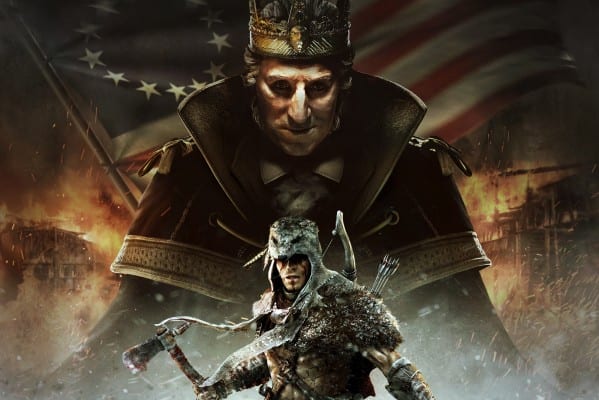 What if George Washington ruled America with an iron fist as king, instead of harboring democracy during his presidency? Assassin’s Creed III asks that question with the first of three epsiodes of The Tyranny of King Washington, the first story-based DLC available for the American Revolution action game. Players can purchase the first episode for 800 MS Points (or $9.99 in real dollars on PSN or Wii U), or all episodes can be purchased for 2400 MS points/$29.99 USD in the season pass. From the press release:

In the first episode of the Tyranny of King Washington series, our hero, Ratonhnhaké:ton, awakens from an unsettling dream to find that, despite his efforts to deliver justice in the newly-founded United States of America, a new king has been crowned – George Washington. The Infamy will take gamers through the beginning of the journey to dethrone this new king.

The three upcoming episodes of the Tyranny of King Washington are available through the Assassin’s Creed III Season Pass, which is available for purchase for 2400 Microsoft Points on Xbox LIVE or $29.99 on the PlayStation® Network and Windows PC. The first episode, The Tyranny of King Washington: The Infamy, can be purchased as a single DLC pack for 800 Microsoft points or $9.99. It can also be purchased at GameStop and Best Buy.

While it’s a bit sad that the story DLC won’t further the overall plot of Assassin’s Creed, it’s cool to see them reaching into history and taking a risk by telling an alternate history… Well, more alternate than it already is, what with all the Assassin’s and Templar running around. George Washington will subjugate your Playstation 3, Xbox 360, Wii U and PC on February 19th.