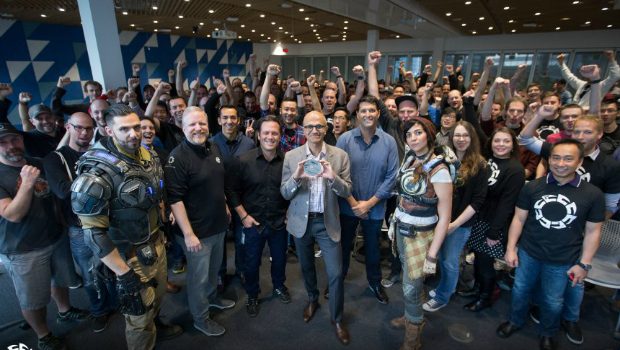 In a post on Xbox Wire, developer The Coalition confirmed today that the Xbox One/Windows 10 exclusive had been finished and sent to Xbox replication facilities for printing and distribution.

Head of The Coalition Rod Fergusson spoke during a celebration for the development milestone, saying “This has been a real homecoming for me.”

Coming back to Xbox to lead a studio of talented people from around the world, all focused on Gears of War, and doing so in my home country of Canada in one of the best cities in the world for technology and entertainment has been a dream come true.

Fergusson also acted as executive producer on the original Gears of War trilogy on Xbox 360 at Epic Games before heading this new studio.

Gears of War 4 is one of many Microsoft produced games to be available in the new Xbox Play Anywhere program, allowing players to play on both Windows 10 and Xbox for one purchase. The game will also support Cross Play across Xbox One and Windows 10 for all game modes — a feature first announced at Microsoft’s E3 conference this year by Fergusson himself.

Gears of War 4 will be available on Xbox One and Windows 10 on October 11. You can check out the new launch trailer here.