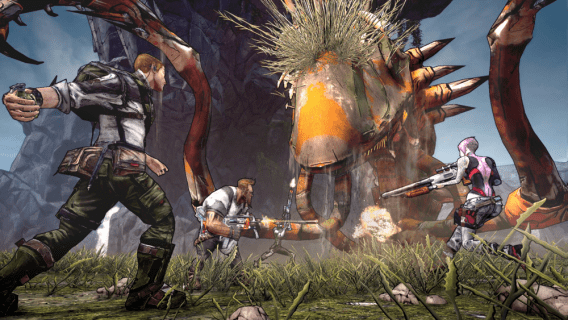 Today at Gearbox’s long-awaited Community Day a lot of exciting news was revealed, but none more notable than their reveal of the endgame boss Terramorphous the Invincible. Fans of Borderlands will remember the Crawmerax the Invincible, the brutally difficult endgame boss that premiered with the release of the The Secret Armory of General Knoxx. Today Gearbox gave players a sneak peak at Crawmerax’s successor who bested even Gearbox President Randy Pitchford in combat. Pitchford explained the unique rewards for defeating Terramorphous:

You can fight Terramorphous multiple times and he’s going to drop different loot every time. Some of the best gear in the game, great legendary items, will drop from this guy. He has specific items that only drop from him in the game. There are some legendaries you’ll only find from him.

Randy Pitchford teamed up with three others using max level characters and tried their best to fell the ruthless enemy, but to no avail; the team’s combined efforts were hardly enough to put more than a small dent into the beast’s health. For those who are looking for a challenge in Borderlands 2, rest assured it’s on its way on September 18th.