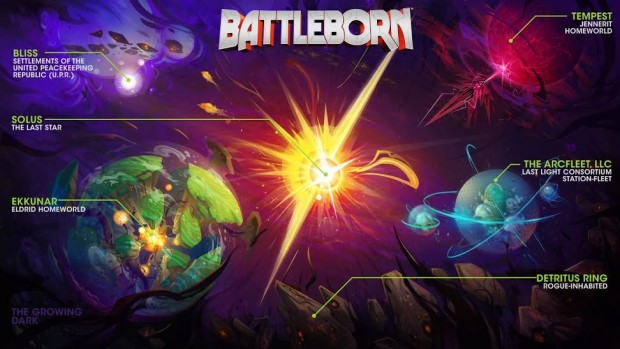 2K and Gearbox have revealed new modes for Battleborn.

The shooter will come with modes that will all be playable with multiple people, while some will also be open to playing by yourself should you feel inclined.

The official description of four of the modes read as follows:

Story Mode: Fight alone, or co-operatively with friends, to save the last star in the universe from a mysterious evil hell bent on its destruction. This narrative experience can be played entirely singleplayer, and is even better when it’s played cooperatively with friend both splitscreen and online.

Incursion: Teams of heroes defend their base from waves of AI-controlled minions while working together, alongside their own minions, to destroy their opponents’ base;

Devastation: Teams of heroes face off in a fast-paced death match and must capture and hold objectives on the map to win;

Meltdown: Teams of heroes protect their minions as they march to their death at the center of the map. Points are scored for minions who throw themselves into the incinerator, and the team with the most points wins.

Along with the unveiling of these modes, Gearbox has also revealed some details about Battleborn’s progression system, and its 25 character classes. Players will be able to pick from 25 total characters, each with their own upgradeable weapons and abilities through what the Borderlands developer calls the “Helix System.”

Gearbox gave some details about how players will be able to upgrade both characters and their own personal player profile that can benefit across multiple characters:

Character Rank: Each hero can permanently rank up from 1 to 10 outside of missions and matches, allowing players to swap out augments in their helix skill tree, as well as unlock skins.

Command Rank: Players can rank up their own player profile, unlocking badges and titles to impress friends, and loot that can be used to benefit any hero the player chooses to command.

For more on Battleborn, check out the latest trailer below: