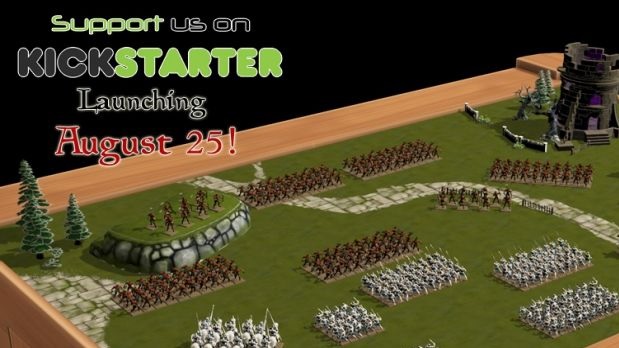 Let’s face it – tabletop gaming can be pretty expensive.  Figures aren’t cheap, a nice Sultan table (totally worth it, by the way) isn’t cheap, and the whole thing takes up a huge amount of space.  When you start fielding entire armies against one another it starts to get a little hectic.  But what if you could take all of that and make it virtual?  Well, best-selling writer and former Games Workshop designer Gav Thorpe wants to find out. Starting August 25th he’ll be pushing out a Kickstarter for a game entitled Mark of War.  This game would let you jump into the world of tabletop gaming with nary a measuring stick, figure, or dice invested!  Check it out:

Warpforged Games is excited to announce the upcoming Kickstarter for Mark of War, a virtual tabletop battle game that allows you to collect and command an army to battle for control of a war-ravaged world. Combining all of the hobby appeal of tabletop miniatures gaming with the versatility and interaction of video gaming, Mark of War puts you in control of every aspect of your army, from the overall strategy to the look of your fighters to the dice rolls that determine their fate!

A team with decades of video game development experience and a lifelong passion for miniatures, Warpforged Games are proud to finally bring the tabletop gaming experience to your PC or Mac.

Inspired by hugely successful tabletop games such as Warhammer, Warpforged have joined forces with best-selling writer and former Games Workshop designer Gav Thorpe to create the world of Mark of War, bringing to life a land ripe for conquest and battle – your conquest, your battles.

This could be a HUGE gateway for a lot of gamers.  I got my first taste of this type of gaming during a Warhammer Space Marine event, and I have to admit that it was alluring.  Backers will receive some fantastic exclusives including limited edition miniatures.  If you are a tabletop expert, this is your chance to help shape something awesome.

“War is simple. They all die, or we do.” Arch-Prophet Ajzak-Votan

You can check out the project at their official site: http://www.markofwar.com Look for our coverage as this kickstart launches in the next ten days.